The world has changed a lot in the past 12 months, with political conflict focusing the world on immediate crises, not the distant future. But a group of scientists are are showing how these conflicts will affect our ability to adapt to climate change down the road–and our ability to survive as a human race.

The Global Adaptation Index is a Notre Dame-based project that ranks every country in the world by how prepared it is for the stresses of climate change: food insecurity, drought, health crises, war, flooding, extreme storms, poverty, and more. The index has been around for years–it is a comprehensive statistical look at how quickly a country can adapt to change (we covered it last year, looking at the countries most likely to bewiped out by these changes).

But this week, the scientists behind GAIN introduced their most recent rankings, showing how 2014 dramatically shifted the preparedness of many countries. The big takeaway? Countries that have seen conflict over the past year slipped dramatically. Syria and Libya top the list of countries that fell through the ranks–while Yemen, a country that’s still covering from a battering of unprecedented cyclones, also slipped dramatically:

“Several countries with the biggest losses on ND-GAIN Country Index are also very fragile, suggesting a connection between climate and conflict,” said Ian Noble, and advisor on the index. That’s because the index doesn’t just rank how at-risk a country is for climate change: It ranks how well it could respond to changes, based on metrics about its economic and political stability, government corruption, and infrastructure.

The ranking gives us two fields: Vulnerability and readiness. For example,take Syria. Syria’s readiness plummeted because neither the government nor the economy is prepared to protect the country from climate change. But what’s really important here is the country’s vulnerability listing. According to the GAIN index, Syria’s biggest vulnerability is water access. The conflict in Syria actually has its roots in the worst drought in its history, which contributed to the conflict.

“[T]he extreme dryness, combined with other factors, including misguided agricultural and water-use policies of the Syrian government, caused crop failures that led to the migration of as many as 1.5 million people from rural to urban areas,” the New York Times reported this year. “This in turn added to social stresses that eventually resulted in the uprising against President Bashar al-Assad in March 2011.” 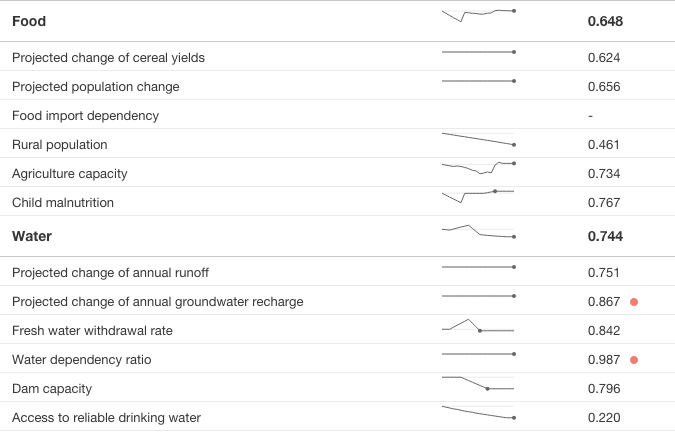 But this wasn’t your run-of-the-mill drought: A study published in theProceedings of the National Academy of Sciences in March showed a causal relationship between the warming climate and the extreme conditions, concluding that greenhouse gas emissions directly spurred warmer temperatures and less rainfall in the region.

As the GAIN index illustrates, conflicts spreading across larger regions further lessens countries’ abilities to respond to the climate crisis–a vicious cycle of war and climate change. Look no further than Paris, where in a matter of weeks, world leaders will convene for arguably the most important meeting on climate change ever held as the city recovers from the horrifying attacks of Friday, November 13th.

The link between our warming planet and the wars spreading across it has never been more clear. Hopefully, the talks with catalyze a plan to break it–but it’s going to be a long road.