The Notre Dame Global Adaptation Initiative (ND-GAIN) is a practical solution to the world’s climate problem. We promote adaptation by identifying the places most vulnerable to the changing climate and identifying real-world solutions that can prevent these changes from becoming disasters.

A program of the Environmental Change Initiative, ND-GAIN’s mission is to enhance the world’s understanding of adaptation through knowledge, products and services that inform public and private actions and investments in vulnerable communities. 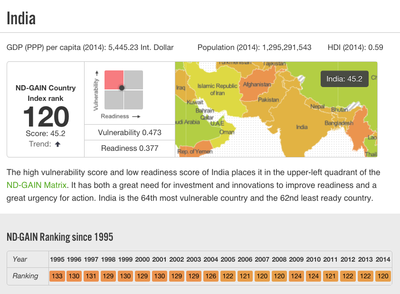 ND-GAIN's Country Index is the world’s leading Index showing which countries are best prepared to deal with global changes brought about by overcrowding, resource-constraints and climate disruption. Free and open source, the Country Index uses 20 years of data to rank 180 countries annually based on their vulnerability and, uniquely, how ready they are to adapt.

Scientists at ND-GAIN have calculated that people living in least developed countries have 10 times more chance of being affected by a climate disaster than those in wealthy countries each year. ND-GAIN research shows at current rates it will take more than 100 years for lower income countries to reach the resiliency of richer countries.

As the world is increasingly impacted by droughts, superstorms, civil conflicts and other climate-related disasters, ND-GAIN identifies critical adaptation needs and opportunities. Our team motivates governments, corporations and non-profits to build social, physical and natural systems that save lives and improve livelihoods, protect our environment, and strengthen market and policy positions.

Climate change is felt on the local level, necessitating granular, context-specific assessments in order to prioritize adaptation actions. Responding to this need, the Urban Adaptation Assessment project, funded by the Kresge Foundation and lead by ND-GAIN, began in early 2015 to produce an urban adaptation measurement solution and pilot it in five U.S. urban areas.

In late 2016, ND-GAIN began work to expand the Urban Adaptation Assessment (UAA) from five pilot cities to more than 270 cities in the United States. The 24-month project aims to assess the climate vulnerability and readiness of every U.S. city with a population over 100,000 –  in an effort to help ignite conversation on preparing for climate change impacts and to inform decisions on infrastructure, land use, water resources management, transportation and other adaptive strategies