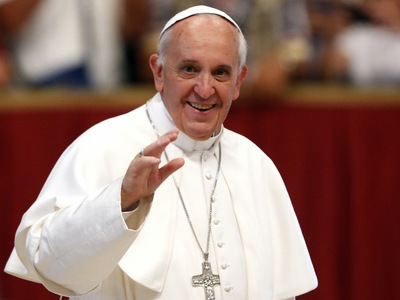 University of Notre Dame faculty members continue to comment on the new encyclical Laudato Si, issued by Pope Francis in Rome on June 18.

In an op-ed essay in Wednesday’s edition of the Chicago Tribune, Notre Dame President Rev. John I. Jenkins, C.S.C., writes that, “It is characteristic of this pope to speak as the Catholic leader but to seek to build bridges to all people who promote friendship and cooperation serving the good of all.

“The pope’s objective will not be to win an election—he will never stand for any kind of election again in his life,” Jenkins said. “He will be trying to deepen our common reflection and spur action on one of the greatest challenges facing humanity today. His goal will be to appeal to consciences.”

According to Joyce Coffee, managing director of the Notre Dame Global Adaptation Index (ND-GAIN), the pope’s letter is “a historic faith-led call to action for the world, asking us to stand together against environmental degradation, global warming, and the resulting impacts on the world’s vulnerable people. The encyclical shows the Holy See’s respect for the unassailable scientific case for taking climate action. Its themes of environmental stewardship and care for humanity validate the need to act on climate adaptation and resilience, along with mitigating greenhouse gas emissions. Focusing on the moral obligation to safeguard the earth and mankind’s common good, the pope mentions ‘the urgent challenge to protect our common home’ and reminds us of our shared humanity and our shared responsibility to save lives and improve livelihoods in the face of climate change." Celia Deane-Drummond, professor of theology, said that, “The encyclical is likely to be one of the most significant papal statements of the 21st century, not because it is inventing anything new theologically, but because what has been on the periphery of theological discussion is now made central. The key insight is this: that our common earthly home is the heritage of all of humanity, not just one political party or nation or civilization. Yet the responsibility for impact on that earthly home through anthropogenic climate change, polluting industries, and species extinction is uneven, with those in the richer industrial nations generating the highest carbon, and most polluting, footprint. And those who have contributed the least at present bear the brunt of such impact. This injustice is obvious for all to see, and, in keeping with the tradition of liberation theology, the cry of the earth unites with the cry of the poor.”

For Candida R. Moss, professor of New Testament and early Christianity, “The encyclical is notable for its detail—the scientific language and specific information allows Francis to head off at the pass accusations that he should stay out of science. The underlying message is that the chemist knows his stuff.

“The biblical and economic language employed by the pope is especially interesting. The encyclical describes the earth as an ‘abused’ and ‘pillaged’ sister. The personification of earth is reminiscent of biblical prophecy in which the land of Israel was depicted as a woman. Just as the Biblical prophets were concerned with abuses of the poor, so too is Francis. By using this language he is adding to the Biblical grammar of sin and saying that care for the environment is a traditional sin just like abuse of the poor. Similarly, the economic language of the rich being indebted to the poor levels the global economic playing field. Everyone has racked up debts, says Francis, and it is the obligation of the rich to care for the poor. Care for the poor is fairly standard Francis stuff, but it is now couched in terms of economic debt. This is language that is sharp and significant in both theological and practical terms.

“Finally, while he isn’t afraid to take aim at Christian climate change deniers who ridicule concern for the environment, there are some subtle olive branches for conservatives too. Benedict linked the destruction of the environment to same-sex relations; Francis subtly ties care for the body of the earth to respect for the gender of one’s own body. In keeping with Church teaching and perhaps under the influence of Peter Turkson, the encyclical specifies that people should respect the femininity or masculinity of their own bodies. This may be an olive branch for conservatives bristling from the encyclical’s main message, but it might also be a sign that even in the Catholic Church the terrain of the culture wars is shifting.”

Patrick Deneen, David A. Potenziani Memorial Associate Professor of Constitutional Studies, said, “Our left-right divide makes it difficult for the fullest dimension of Catholic social teaching to receive a full and fair hearing. So I fear reception through partisan lenses will likely result in a blinkered, partial reception that will tend to reinforce, rather than challenge, this unfortunate alignment. As long as we continue to view the problem of ecological degradation solely as a ‘technical’ problem, it’s almost certain that we will not make any meaningful change to current trajectories.”

According to Jessica J. Hellmann, associate professor of biological sciences and research director for ND-GAIN, “The challenge the pope raises today must be taken up immediately by the young and the old, but as a professor I think about the challenges and opportunities confronting young people. They will be responsible for identifying and implementing solutions to environmental problems. They also must hold their elders accountable for fixing problems before they get worse, for reinventing what it means to lead a good life. They will need to understand how science and value interact and how to move between knowledge and wisdom.” John O’Callaghan, director of Notre Dame’s Jacques Maritain Center and associate professor of philosophy, said that “the style of Laudato Si is to hook the reader with the discussion of environmental waste and its impact upon the poor in order to lead to a grand Christo-centric vision of the cosmos and ourselves within it as belonging to God. That is a very traditional Catholic vision, reflected in Augustine’s Confessions and Aquinas’ Summa Theologica, not to mention Bonaventure, Dante and Thérèse of Lisieux, all of whom Pope Francis relies upon in the encyclical. It’s as if Pope Francis were putting people on the train in Manhattan or Washington and taking them to Bethlehem.

“So it is a mistake to describe Laudato Si as merely an environmental or economic encyclical,” O’Callaghan said. “It’s an evangelical offering of the Good News, a vision of how the incarnate logos of God should change everything we think about and do in the world. The encyclical’s Catholic vision just keeps building to the end, where it is overwhelming. It’s likely that many secular people will jump off Pope Francis’ train when they see where it’s going, but perhaps some won’t. Sadly, it seems some Catholics in New York and Washington have refused even to get on the train. For them, it’s ‘Mater si, Magistra, no.’”