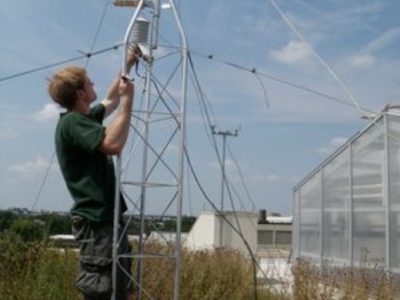 As populations rise, cities grow and the Earth heats up due to global warming, urban heat island (UHI) effects are expected to increase. These occur because city walls, streets and roofs hold in the sun’s warmth, making cities warmer than the land surrounding them. Large cities such as Chicago have the most to gain from technologies like green and cool roofs that reduce UHI effects.

Ashish Sharma, postdoctoral researcher at the University of Notre Dame’s Environmental Change Initiative, has been investigating how the type of roof chosen for buildings can have a large impact on UHI effects. Sharma has been studying the effectiveness of cool (reflective) roofs versus green (vegetation-covered) roofs to find out just how much roofing type can mitigate urban heat island.

“A lot of this project has been exploring numerical modeling of cool and green roofs,” says Sharma. “We’ve been trying to express the contribution of roof effects to climate models and capture how much we can decrease UHI effects by using new approaches in roofing that are available now.”

Data for modeling roof effects on UHI and climate were taken from Notre Dame-constructed observational towers that sat on top of either cool or green roofs. Temperatures were measured 1 meter above the roofs. RM Young sonic anemometers and thermocouples were used to obtain data on temperature and wind speed. Patrick Conry, a civil engineering graduate student, collected the measurements. 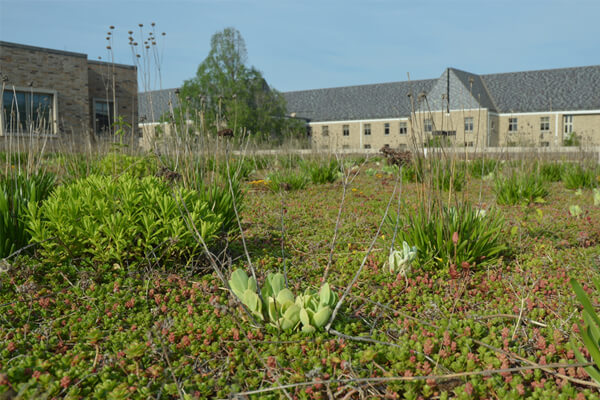 Sharma and the modeling team plugged those into a general spatial model for North America and focused on Chicago. Other data added to the model included horizontal and vertical air velocity, temperature, moisture and precipitation.

The team began with a North American Regional Reanalysis climate model at 32-kilometer resolution, scaled it down spatially in multiple steps and zoomed in for a model of half the U.S. From there, they narrowed it to the Great Lakes region and finally resolved the model into 1-kilometer pixels that spatially showed effects on Chicago. The model was run in parallel at the National Center for Atmospheric Research’s Yellowstone supercomputer.

Sharma saw large variations from one area to another in Chicago, possibly due to differences in building composition and orientation or proximity to parks and water bodies. The numerical modeling analysis included not only rooftop data but also data nearer to the ground for comparison.

“We saw decrease in temperatures in the lower atmosphere for first 2 kilometers above ground surface,” Sharma indicates. “Vertical and horizontal wind speeds also decreased. Thus, the polluted air near the ground may get stagnant and adversely impact the city’s air quality.”

Sharma says the green roof and the cool roof offer about the same in terms of mitigating UHI effects, according to the team’s modeling results.

“They are different strategies but in terms of their effectiveness, I would not put the vegetative roof over the cool roof or vice versa. Each approach has significant benefits, but must be tailored to what a city wants and what their needs are, in addition to their importance in abating UHI,” Sharma says.

Some cities might reject the idea of having a vegetative roof and favor cool because they do not want the cost or effort required to irrigate and otherwise maintain the vegetative. Others might prefer a vegetative roof because it will reduce air conditioning requirements as well as air temperatures. A vegetative roof can filter the air, improving air quality around a building. It can also serve as an area for conservation, preserving biodiversity or habitat. 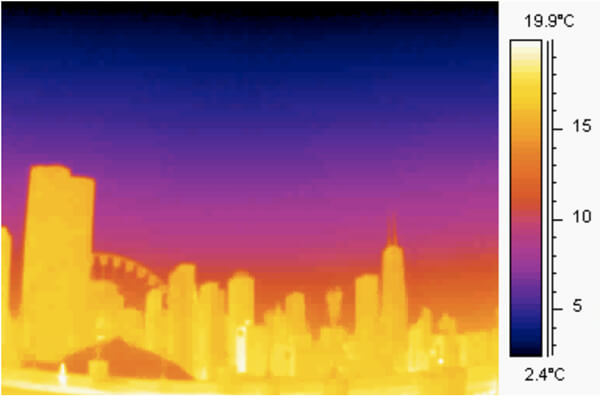 “When we talk about green roofs, there is really a lot of variety,” Sharma explains. “A vegetative roof could just be turf. Or it could be some beautiful flowering gardens. It could be multi-use, including turf and bushes and potted plants. It can even be full-sized evergreens growing in an area that mimics a small woods. There are many possibilities. In Europe, you see more green roof experimentation than you do here. But if we can get more support for the movement here, perhaps we will see more in the U.S. in the future.”

For cool roofs, Sharma says there really aren’t many requirements to having an effective roof surface.

“Basically, it just has to be highly reflective type of paint, a sheet covering or highly reflective tiles or shingles,” says Sharma. Those owning buildings in desert environments where there is a lot of sunshine and very little water to irrigate a vegetative roof may well prefer cool roofs. “In Arizona, cool roofs may be the way to go. In Chicago, green roofs might be a better choice.”

But Sharma stresses that new roof strategies should not be introduced as a means of replacing other methods for reducing urban heat island.

“Vegetative or cool roofs should go hand in hand with other ways of cooling down UHI, such as parks and other green space,” says Sharma. “The roofs should just be part of the total city cooling strategy. Our hope is that city planners, architects, land managers and others will use our study information as part of a comprehensive plan to treat UHI in the future.”