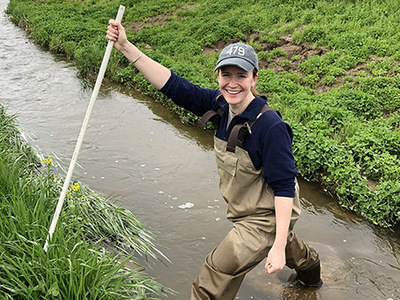 Shannon Speir’s research focuses on how storms affect nitrogen concentrations in Indiana streams, but this nutrient build-up influences bodies of water as far away as the Great Lakes and the Gulf of Mexico.

The fourth-year graduate student, who is pursuing a doctoral degree in biological sciences, works in the lab of Jennifer Tank, Galla Professor of Biological Sciences, to combine ecology and environmentalism in her study of cover crops’ effect on nitrogen in waterways.

Speir’s far-reaching work has received recognition from the North Central Region Sustainable Agriculture Research and Education Program (NCR-SARE). The graduate student grant they awarded her will help Speir continue her research and education efforts on the pollution of humanity’s most precious resource.

Every time it rains, excess fertilizer from farm fields washes into streams and rivers, which increases the concentration of nitrogen in the water. Although nitrogen is essential for humans, plants, and animals, too much of this nutrient can have lethal effects on individuals and the entire ecosystem.  For instance, the nutrient has promoted the growth of toxic algae blooms in Lake Erie, which contaminated public drinking water. And in extreme cases, nitrogen can even outcompete oxygen in a person’s body. This condition, known as “Blue Baby Syndrome,” especially affects the very young and the very old, and according to Speir, it is “like suffocating from the inside out.”

Not only does nitrogen become overabundant in fresh water near farm fields, but it can travel to the ocean as well.

“Nitrogen from especially our area here in Indiana, as well as Iowa, Illinois, [and] the whole corn belt has been identified as the main cause of [the] dead zone in the Gulf of Mexico,” Speir said. This area of reduced oxygen prevents fish and other wildlife from living in the gulf, and as Speir warned, “every year it continues to get bigger.”

However, ecological research provides hope for preventing some of these effects.

“Understanding how nutrients are transported from agricultural areas to streams and then eventually making their way further downstream is important for reducing the harmful impacts,” Speir said.

Rain increases this nutrient flow from agricultural areas. Speir has found that even one storm can export up to 25 percent  of the amount of nitrogen that makes it way into waterways yearly. Fortunately, conservation practices like planting crops during the off-season can prevent both soil and this excess nitrogen from washing out of farm fields.

The NCR-SARE grant will support Speir in connecting the effects of these cover crops with the patterns she sees during storms. NCR-SARE specifically looks for scientists who combine research and education efforts, a goal which the program’s administrative council of farmers, academics, federal employees, and nonprofit groups believe Speir’s research on agricultural nitrogen pollution in waterways fulfills.

For Speir’s study, the NCR-SARE grant will fund calibration checks on sensors that measure nitrate concentration in waterways every thirty minutes. These special devices allow Speir to see the rapid, fine-scale changes in nutrient levels during storms that “traditional approaches to sampling can’t always capture,” she explained.

Although she has been collecting data with these sensors for three years, the effects of conservation take a long time to fully manifest. Speir said that the grant will help pay for another year of study, which will give her greater insight on the pressing issue of increased nitrogen concentration.

In terms of outreach, the NCR-SARE grant supports annual meetings where Speir and her team come together with farmers to share their results, educate them on conservation strategies, and receive feedback. Speir appreciates the firsthand knowledge she gains from these interactions, which helps her better understand the practical implications of her research.

“It’s really become kind of a partnership with the farmers,” Speir said.

Speir also engages wider audiences with “Cover Crop Field Days” and helps host “Science Sunday” at the Notre Dame Linked Experimental Ecosystem Facility (ND-LEEF) for younger environmental enthusiasts. Eventually, she would like to work as a professor and share her passion for ecology with even more students.

“I find it very rewarding, and it’s fun,” Speir said. “It doesn’t feel like coming to work every day.”

But in addition to her own personal excitement for science, Speir appreciates that her study can inspire positive, real-world change. As demonstrated by the way she combines research and education with the NCR-SARE grant, her work transcends mere theory and inspires applicable measures to protect the environment. In fact, this emphasis on “translational ecology,” as the Tank lab calls it, first brought Speir to Notre Dame. While nitrogen pollution affects locations far from its place of origin, the solutions Speir’s research suggests will influence sustainable practices far beyond this university, as well.

“I think what’s most rewarding is doing research that actually has an impact,” Speir explained. “When I was looking for grad school programs, that’s really what I wanted,… because I wanted my research to matter, to make a difference, to make the world a better place.”