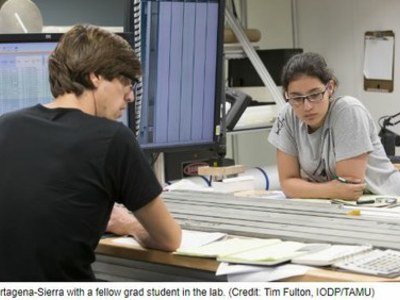 Three continents, five countries, and countless hours spent traveling by boat, plane, train, and car. To say Alejandra Cartagena-Sierra's research is her passion project is an understatement. The past year has been a wild ride for the Ph.D. candidate as she studies sea-surface temperatures (SSTs) during the Pliocene and Pleistocene epochs around southern Africa, a region that has rarely been explored due to plenty of roadblocks and red tape.

Cartagena-Sierra's journey began in 2016 with a two-month voyage at sea accompanied by her advisor, Professor Melissa Berke, and a crew of 27 other Ph.D. students, professors, and scientists. Due to the global nature of her research, being surrounded by experts from around the world was incredibly beneficial to the future of her work.

“It was a big honor to be on the expedition,” said Cartagena-Sierra. “I was the youngest one there, the one with the least experience, and therefore, thirsty for knowledge.”

The boat set sail from the island of Mauritius near Madagascar. From there the crew would make their way to South Africa, ending in Cape Town. There were several obstacles in place that made the research process long and arduous. The location was ideal for the lack of data from that area, yet research off the coast of southern Africa was limited for several reasons.

“It is hard to get there, the ocean is not always your best friend in that area, and piracy is still an issue in that region,” said Cartagena-Sierra. “Plus, it is really hard to get the licenses and permits to drill and work, we had to wait almost 10 days on sea just to get permission.”

Days were filled with sample collection of mud from the ocean floor, description, and analyses of those samples, and weekends were not a time for relaxing. Considering this was just the beginning of her long academic odyssey, there was no time to give in to exhaustion.

Following the ocean voyage, Cartagena-Sierra, Professor Berke, and the other researchers gathered in Texas to join the “Sample Party” where more than 36,000 were taken from the cores that were recovered during the expedition at sea. The samples she was most interested in contained the climatic history of the last five-million years along with potential links to changes in the global climate during that period of time. Using the samples, Cartagena-Sierra would be able to reconstruct the past sea surface temperature and salinity to understand how the variability of these parameters could affect or could be affected by major global climate transitions within the past five million years.

“This is important to us right now because one of the periods I am reconstructing is the mid-Pliocene warm-period, and that was the last time the planet experienced global mean temperatures higher than today’s,” said Cartagena-Sierra. “The average temperature was two-to-three degrees higher than what we have right now and the carbon dioxide levels in the atmosphere was close to what it is today, so we believe that even though we did not have the same players, it is in our best interest to try to understand how this planet behaves under these conditions, at least locally.”

Cartagena-Sierra then made her way to Utah to connect with other scientists in the same area of research who could be potential collaborators in the future. It also gave her the opportunity to hear feedback on her research, the good and the bad.

“One of them was like, why would you think that? Why would you want to try that?” said Cartagena-Sierra. “Then I asked these two researchers who are well known and they said to try it!”

Equipped with new professional connections and constructive feedback, Cartagena-Sierra returned to Notre Dame and was finally able to start working with her samples. The first time period she focused on was the Plio-Pleistocene transition, covering from 3.0 to 1.8 million years ago.

Italy and the Netherlands

After countless hours in the lab, Cartagena-Sierra packed her bags for Italy in September 2017 to present her research at the International Meeting of Organic Geochemists. She was awarded the Geological Society of America Graduate Student Research Grant to support her project, Temperature Reconstructions of the Agulhas Corridor during the Plio-Pleistocene Transition. She also received the 2017 European Association of Organic Geochemists Travel Scholarship Award to continue her work at the Royal Netherlands Institute for Sea Research.

The opportunity to work in the Netherlands was invaluable and the facility had an awe-inspiring amount of instruments for analysis.

It was no easy feat traveling from Italy to the Royal Netherlands Institute for Sea Research.

“You had to first fly to Amsterdam, then take a train to a little town nearby, then take a bus to the ferry, and then take a ferry to the island,” said Cartagena-Sierra. “I tried every kind of transportation there was!”

Upon arrival, Cartagena-Sierra had the honor to work with renowned researcher Dr. Marcel T.J. van der Meer, one of the world's foremost experts on the hydrogen isotopic composition of alkenones and their interpretation. Therefore, he was an ideal collaborator and host for her visit. van der Meer showed Cartegena-Sierra how to use the instrument, perform analyses, and served as a sounding board and mentor for her research.

"He started training me and he was really easy to work with," said Cartagena-Sierra.

Cartagena-Sierra's priority was trying to reconstruct sea surface temperature and salinity variability through the utilization of molecular fossils, alkenones, from sediments. In order to get the relative salinity from the molecules, she needed to analyze the hydrogen isotopic composition of alkenones.

Dr. van der Meer's proficiency with the topic also helped her to understand the best course of action forward with her research.

“He told me he was really interested in my work, his favorite word to use was, intriguing!” said Cartagena-Sierra. “It was so exciting to see someone else excited about my research.”

After three weeks it was time to pack her bags and return back to Notre Dame. Her experiences over the past year have allowed her to become connected with the broader scientific community and make considerable strides forward in her research. Cartagena-Sierra will now be focusing on another time period and will work with younger samples to analyze the climate transitions between different periods of time.

Originally published by Allison Preston at ceees.nd.edu on December 04, 2017.