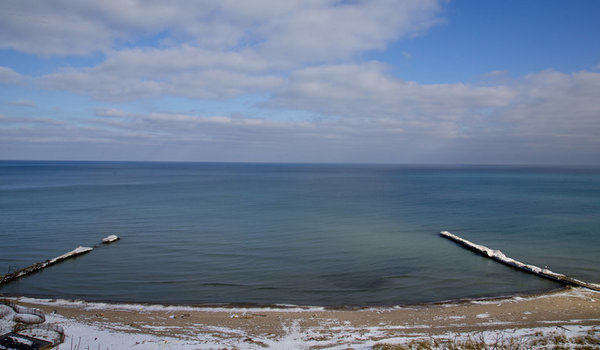 My hometown of Waukesha, Wisconsin, used to be famous for its refreshing, clear spring water. In the late 19th century, people flocked to Waukesha to drink water at mineral springs and hang out at fancy summer resorts and mud baths. But those good water days are past. The water from the city's deepest wells is tainted with radium and salts, so it is looking to ditch those underground wells and permanently get its drinking water from Lake Michigan, 15 miles to the east. That proposal is neither cheap, nor without controversy.

Waukesha’s deep well water exceeds federal limits for radium in drinking water.Radium occurs naturally, but lifetime exposure is a cancer risk. And the deeper you go in the sandstone aquifer underneath the region, the more radium.

Waukesha is abiding by a consent order to fix the problem. It's taken temporary steps to address the issue, including using radium filters and blending water from deep wells with radium-free water from shallow wells. But the city says that's not a sustainable solution. It wants to build a pipeline to tap Lake Michigan. Some other radium-challenged communities, including Green Bay, have done just that.

“Really, it’s a no-brainer of a decision,” says Dan Duchniak, general manager of theWaukesha Water Utility. “The Great Lakes is the best, most reliable and only reasonable alternative for the city of Waukesha.”

“We have had some unbelievable policy and big programs designed to move water great distances, and now we’re starting to see there are problems with that,” says Peter McAvoy, counsel for the Great Lakes Compact Implementation Coalition, a watchdog group.

Under the compact, Waukesha has to prove it can’t find a reasonable alternative to Lake Michigan closer to home. All eight Great Lakes states, from Minnesota to New York, have to sign off on Waukesha’s diversion request. Two Canadian provinces, Quebec and Ontario, are allowed to comment.

Eric Ebersberger, chief of the Wisconsin Department of Natural Resources’ water-use section, says the burden of proof is heavy.“The administration here has been very clear that this should be very difficult,” Ebersberger says. “It should be difficult to prove up an application for a diversion.”

The city has already imposed water conservation measures. It would build a second pipeline to return the water to the lake after it's treated. The amount of water it's asking for is relatively trivial, but the state has asked the city for thousands of pages of documentation since Waukesha applied five years ago.

Not surprisingly, politics has also delayed the process. At first Waukesha wanted to buy the water from Milwaukee, but the two cities couldn't strike a deal. Peter Annin, author of “The Great Lakes Water Wars,” says underlying tension between Milwaukee and Waukesha counties played a role.

“The citizens of Milwaukee say, if you want to use Lake Michigan water, move to our great city and use it. We don’t want to see it leaving town and contributing to sprawl in the suburbs," Annin says.

Waukesha has since struck a deal to buy Lake Michigan water from Oak Creek, a Milwaukee suburb. But the city’s plans have ignited debate about what it means for a city to keep its water consumption within set limits. There's a persistence suspicion that Waukesha is designing its water plan to support continued economic growth, because its application asks for more water than the city currently uses and anticipates the need to supply water to areas outside of current borders.

“Their own studies show that they’re talking about industrial and business growth,” says McAvoy of the watchdog group. “Is that reasonable? Will that come at the expense of other communities in the Great Lakes?”

Waukesha officials say the compact isn't in place to limit growth. But it does require water applicants to account for future growth.  And the city doesn't want to underestimate, its officials say, especially in the middle of an economic recovery. Waukesha Mayor Shawn Reilly says there isn't that much more land available for development anyway. "Development that happens in Waukesha is not a zero-sum game, where we take it away from Milwaukee," he says.

They also point out that levels in the deep aquifer have rebounded modestly in the last decade, a change that probably won't solve the city's problem but may complicate its diversion request.

Doug Cherkauer, a hydrogeologist at the University of Wisconsin, Milwaukee, says Waukesha's solution is "easy and direct" – so he understands why Waukesha chose it. “But the ultimate solution in the case of Waukesha and nationally is to treat our wastewater to the point that it’s not contaminated anymore," he says. "That’s technologically possible now. It’s not cheap.”

However Waukesha ends up fixing its water problem won’t be cheap. Duchniak, the utility manager, expects water rates to double, if not triple, in the future. Paul Vrakas, 87, a former mayor, says city leaders in the 1970s and 1980s thought water was “a bottomless pit.” Now he thinks otherwise.

“We’ve lived in our country with these important things that we need in our lives being very cheap,” Vrakas says. “Well, we’re going to have to spend more money on that important stuff than on an extra pair of jeans, do you know what I’m saying?”