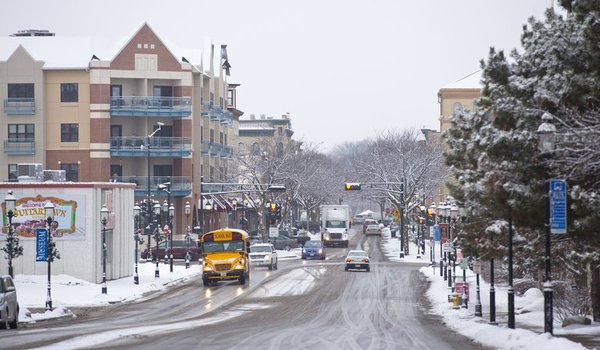 My hometown of Waukesha, Wisconsin, is surrounded by water. There are creeks and rivers. The fourth biggest lake in the world, Lake Michigan, lies 17 miles to the east. Every year the city gets an average 34 inches of rain and 40 inches of snow. Yet Waukesha has a big water problem. Its deepwater wells are contaminated withradium and salts, and now the city needs to figure out a new source of drinking water. How did a city in such a water-rich state get into such a pickle?

Waukesha’s water story started out well enough. In the late 1800s the town was known as the “Saratoga of the West.” People flocked there in summer, 25 trainloads a day, to drink cold, pure water from dozens of mineral springs around town.They thought the water could cure such ailments as diabetes and depression. John Schoenknecht, author of“The Great Waukesha Springs Era: 1868-1918,” says Waukesha water was so prized that when a savvy entrepreneur tried to pipe it down to Chicago for its world’s fair in 1893,  townspeople nearly rioted, fending off his work crews with pistols and rifles.

Eventually the springs and fancy summer resorts there fell out of fashion. Most of the springs were paved over or dried up as the city developed. But Waukesha’s reputation for good water survived, even when grittier industries moved in, including many foundries. All the factories needed water. To meet the demand the city drilled new wells, some nearly 2,000 feet deep, into the sandstone aquifer.

When my family moved there in 1969, Waukesha was a suburb with almost 40,000 people. Dairy farmers just outside the city’s borders were selling their land to developers who wanted to build new subdivisions. “They were just coming into City Hall like crazy wanting to annex,” says Paul Vrakas, 87. He was Waukesha’s mayor during much of the city’s growth spurt. “It was like having a tiger by the tail, and I think we did a great job,” he says.

If the city hadn’t annexed all the new subdivisions that wanted city water, developers would have built them anyway, Vrakas says. But on oversized lots with private wells and septic systems that eventually would fail. “We, of course, had the treatment plant, state-of-the-art treatment plant and municipal water,” he says. “So it made sense for the city to accept the growth and do it properly.”

City officials weren’t worried about the water supply. Waukesha water customers paid some of the lowest rates in the state. The more a customer used, the lower the rate. Peter Annin, author of “The Great Lakes Water Wars,” says the city’s policies actually encouraged lawn watering. “Because you got a credit on your water bill if you had water that was used but didn’t end up back in the sewer system,” Annin says.

But in 1987 Waukesha’s water officially became a problem. The state put the city on notice. Its drinking water was contaminated. Radium levels were over twice the legal limit. The aquifer beneath the city recharges slowly, and years of overpumping had lowered the water table hundreds of feet. “As you use this water over time, over the last 100 years when we’ve developed groundwater and used it, we’ve drawn down the aquifer to the point where we’re pulling up the water that’s contaminated," says Dan Duchniak, general manager of the Waukesha Water Utility.

Radium is a naturally occurring metal that’s common in groundwater pumped from sandstone aquifers. But the deeper you go, the higher the concentrations. Lifetime exposure increases the risk of cancer.

The state ordered Waukesha to fix its radium problem. But the city resisted. It fought regulators and ultimately sued theEnvironmental Protection Agency. Fixing the problem was going to be expensive, and city leaders believed the government was overreaching. “In fact, the Argonne Laboratory said that amount of radium was no hazard,” Vrakas says. “And many local doctors told me the same thing as well.”

Nearly two decades later, after a federal appeals court ruled against the city, Waukesha finally decided to stand down. By then, the city’s population had grown another 20 percent.  And its water quality had grown worse. “Waukesha is this poster child of what can happen when you assume that water will just always be there,” Peter Annin says. "And what surprises a lot of people is that here we are in one of the richest water areas of the globe, and yet, we are still fighting over water here in the Great Lakes region.”

But water-challenged cities like Waukesha know they need a secure water supply to keep and attract economic investment. Right now, the city is pinning its hopes on an expensive proposal to pipe water in from Lake Michigan. That’s something those pistol-packing Waukeshans who didn’t want their water piped out to Chicago probably never could have imagined.