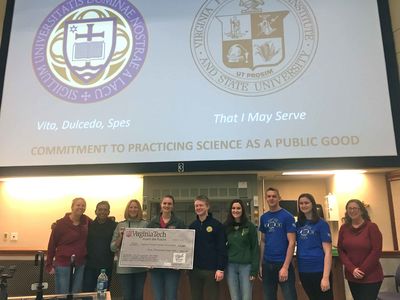 Before the Irish and Hokies took the field Saturday, Virginia Tech researchers took the stage to give Notre Dame an inside look at the Flint water crisis.

Siddhartha “Sid” Roy and Dr. Kelsey Peiper are members of the Virginia Tech research team that in 2015 helped uncover high levels of lead contamination in the Flint, Michigan water supply. They spoke at two events hosted by the Notre Dame Environmental Change Initiative.

On Friday afternoon, Dr. Jennifer Tank, ND-ECI director, moderated a panel discussion, “Flint, Water, Science and the Public Good.” Roy and Pieper were joined by Kevin Klau ’96 and David Henderson. Klau is president of Hach Company, a leading manufacturer of water testing equipment. Henderson is founder and partner of XPV Water Partners, which provides investment capital, managerial and technical expertise to companies in the water sector.

As Peiper and Roy explained, Virginia Tech was already known for its role in detecting dangerously high lead levels in the Washington, D.C. water supply in 2001. Even so, they were shocked when they received the first water samples from Flint, sent by a mother who could get no response from Michigan’s health and environmental officials.

“These residents knew there was a problem. They could see it, they could smell it, it was affecting their health,” said Pieper, an USDA-NIFA Postdoctoral Fellow at Virginia Tech.

Yet the government scientists and engineers who were supposed to help the public were little help at all.

“The local, state and federal government failed to protect them (Flint residents),” said Roy a PH.D. candidate in the Department of Civil Engineering at Virginia Tech. “They covered up the fact that the water was contaminated and ridiculed residents who tried to raise their voices.”

Thanks in part to Virginia Tech’s diligence, Flint has since received more than $600 million in funding to treat water contamination and counter the health ailments caused by lead ingestion. While there is still much progress to be made, Roy said the water quality in Flint continues to improve.

On Saturday morning, Roy and Peiper’s “From the Frontlines of Flint” presentation in Jordan Hall used stories and images to explain how the crisis unfolded. Then, as a grand finale, they used their South Bend visit to repay a Notre Dame favor.

Roy and Peiper reciprocated with a $2,001 check given to the Notre Dame chapter of Engineers Without Borders (EWB). EWB’s advisor Dr. Melissa Berke was there to receive it, along with five Notre Dame student members of EWB. They will use the VT donation to build water wells in rural Cameroon.

"We want Notre Dame to know that their initiative was one of the first supports from another academic institution made directly to us,” Roy said. “It was one of the most heartening things ever!"

In acknowledging the gift, Bodensteiner said this kind of collaboration was part of Notre Dame’s decision to join the Atlantic Coast Conference in 2013.

“Notre Dame’s membership in the ACC isn’t just about athletics. It’s about the values of service we share and this gift is a great example of that.”