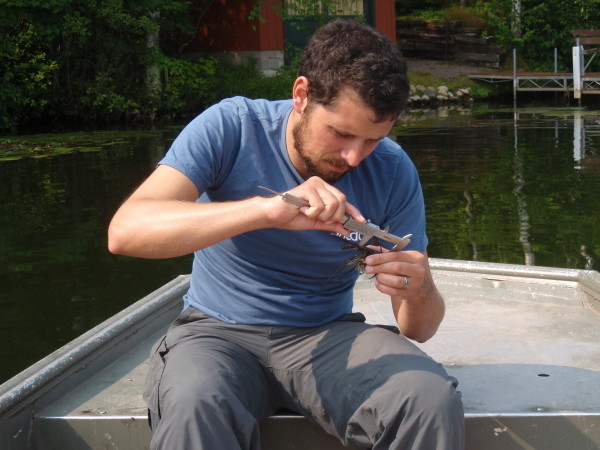 Where Am I?
I’m working predominantly in Vilas County, Wisconsin out of the University of Notre Dame’s Environmental Research Center (UNDERC), as well as doing some research at the University of Wisconsin’s Long Term Ecological Research (LTER) site on Trout Lake. Off the football field, the Fighting Irish and Badgers have actually been great collaborators up here over the years. Although I’ll be working primarily in the Great Lakes in the future, my first project here is building on long-term datasets on native and invasive crayfish dynamics, largely developed by my mentor and collaborator, Dr. David Lodge.

What Are We Interested In?
One of the most exciting questions we’re working on is “boom and bust” population dynamics of the invasive rusty crayfish. Rusty crayfish first started showing up in northern Wisconsin lakes a few decades ago – they’re introduced from nearby within the United States (e.g. Ohio), but still have pretty big impacts outside of their native range. Many of these northern Wisconsin lakes were already well-studied by a number of researchers like Dr. Lodge, and the profound changes that rusty crayfish caused in them were easy to observe: rusty crayfish reduced abundances of other invertebrate species like snails, as well as aquatic plants that are important habitat for fish, and this ultimately lead to declines of many fish species themselves – including economically important sport fish. One of Dr. Lodge’s past PhD students (Dr. Reuben Keller, now at Loyola University) even put a price on these impacts: rusty crayfish cost Vilas County alone $6 million in tourism dollars between 1975 and 2005.

But are rusty crayfish still a problem? Invasion biologists occasionally observe a phenomenon in which introduced species collapse (“bust”) after their initial huge population increases (“boom”). For rusty crayfish, we might predict a number of reasons this could happen. For example, by so dramatically modifying lakes, rusty crayfish may ultimately make these lakes inhospitable to their own populations. If rusty crayfish greatly reduce the abundance of prey (other invertebrates) and their own habitat (aquatic plants), perhaps they’ll experience population declines over time? Our conversations with many people who live on lakes in Vilas County suggests that this may be happening: that crayfish have become less abundant over the past decade, and that aquatic plants and some species of fish are making apparent recoveries.

What Are We Doing?
We’re testing these observations in 13 Vilas County lakes that have been sampled nearly every year dating back to 1975. I’m currently estimating rusty crayfish abundances in these lakes using a standard crayfish trapping protocol, and will then conduct an analysis seeking to determine if these crayfish have really declined relative to their historic high abundances. Further, if rusty crayfish have experienced “busts” in some lakes, we will seek to understand why. For example, lakes with more rocky substrates may buffer crayfish populations from declines. Crayfish not only use aquatic plants as shelter from aquatic and terrestrial predators, but they also use rocks – which crayfish don’t reduce or change through time by their foraging or burrowing behavior, unlike aquatic plants. Rocky lakes may be resistant to “busts”, whereas lakes with soft substrates and many (historic) aquatic plants may experience rusty crayfish declines through a feedback in which crayfish destroy or consume their own habitat.

What Does It Mean?
Ultimately, our hope is that we can identify those lakes where rusty crayfish may be long-term nuisances, as well as those lakes where rusty crayfish invasions may ultimately run their course and “bust.” Beyond tackling one of the hottest topics in invasive species biology (why and when do some invaders decline?), this work has high potential to inform management and prevention of rusty crayfish invasions by identifying those lakes that may be most strongly impacted by this species. This work will also subsequently feed into my studies on the Great Lakes themselves, as testing the importance of habitat type on rusty crayfish dynamics will allow us to identify those Great Lakes shorelines most vulnerable to the effects of this species.

Why Northern Wisconsin and Michigan?
Finally, this has been a great opportunity to work in one of the most famous and best-studied places in the world for “limnology,” or the study of lakes. Researchers from the University of Notre Dame and University of Wisconsin have worked intensively in Vilas County for decades, conducting unique whole-lake experiments that have proved enormously revealing with respect to how freshwater ecosystems work, and building invaluable long-term datasets that are extremely rare in the US and globally. Questions like the prevalence of “boom and bust” dynamics among invaders like rusty crayfish are largely unanswerable without ongoing, intensive ecological monitoring, and I’m extremely excited to be working with Dr. Lodge on this novel dataset.

Vilas County is primed to remain an extremely important place for ecological research, through the Trout Lake LTER site and the new National Ecological Observatory Network (NEON), which is building one of its Midwest long-term study stations at the University of Notre Dame Environmental Research Center. You may have visited Vilas County or someplace nearby in northern Wisconsin or Michigan to vacation at a lake cottage, but the north woods aren’t famous just for musky fishing and water skiing. It’s also one of the most studied and valuable places in the history of US ecology and freshwater science.

Dr. Eric Larson, Shedd Aquarium’s newest postdoctoral research associate for the Daniel P. Haerther Center for Conservation and Research, is in the field researching the population dynamics of the invasive rusty crayfish. By estimating how many crayfish there are in 13 Wisconsin lakes, he hopes to better inform the conservation and management of this invasive species.

Originally published by Eric Larson on National Geographic on August 22, 2014.