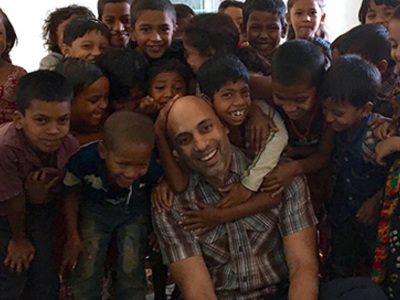 After a day of thinking I’m going to die, I’m going to die, while driving in the chaos of rickshaws, pedestrians, dented buses, beggars, and animals that crowd the streets of Dhaka, Professor Diogo Bolster, who studies fluid dynamics, began to notice a sort of orderly flow within the chaotic system.

“I realized, Wow. This is actually really fluid. Things go and they melt and they move.”

As far as Professor Bolster could tell, the entire city of over fourteen million with a density four times New York City’s, has just one traffic light and no other road rules to speak of. But he slowly picked up on informal systems.

Professor Bolster was part of a group of Notre Dame researchers, who travelled to Bangladesh over spring break.

The purpose of this trip was to support the new University and to build research collaborations around water, climate change and public health with Bangladeshi institutions.

Due to it’s position as a low-lying country with high population density and high levels of poverty, Bangladesh is and will disproportionately feel the effects of climate change.

Biology professor Jennifer Tank, who is used to push back against climate research, was surprised by how differently people talked about climate change there:

“Climate change was on the tip of their tongues. It was a given. They are the frontlines. They are dealing with it, so it is the first thing they want to talk about.”

Many of the institutions that they visited had shabby exteriors and well worn conference rooms. But over and over again they were blown away by the caliber of the scientists they met and energized by the intellectually stimulating conversations they had.

Professor Bolster explains, “All of us were blown-away -- for me it was at BUET for engineering, for the biologists it was the Cholera Institute -- but all of us were just really really impressed by the standard and level of science that is already there.”

So far three research collaborations have emerged from this trip.

The first is looking at transboundary water issues. Marc Muller, a professor of hydrology and civil engineering, who came to Notre Dame in January -- he got the email inviting him to Bangladesh before he started his position -- uses remote sensing, particularly satellite data, to predict water resources.

Dhaka lies in the heart of the Bengal delta. Most of the fresh water that flows into Bangladesh is controlled by dams in India. The quantity and quality of this transboundary flow has far-reaching effects.

Professor Muller explains, “The objective of the project is to use available data and modeling to disentangle local, regional and global causes of water issues in Bangladesh.This is important from a policy standpoint. If it’s India that really matters then you want to focus on doing diplomacy and if it’s local factors, you can do something about it directly.”

Bangladesh has a variety of water issues. Arsenic contamination in groundwater wells, has led much of the population to switch their water sources. But agricultural practices and sea level rise has led to increased salinity of these other sources, which in turn is correlated to rising levels of hypertension. In addition, water quality, in particular nutrient load, is a key contributor to algal blooms, which lead to cholera outbreaks.

Professor Bolster laments, “It seems like no matter which water source they go to, they keep getting screwed -- there is always a different issue going on. So we want to go in and understand and predict and develop the links between water and disease in Bangladesh.”

Professor Muller, Professor Bolster and Professor Tank, who studies algal blooms are pooling their resources and expertise with hydrologists and ecologists in Bangladesh to disentangle these interconnected issues.

Professor Muller believes that this project could have implications beyond Bangladesh, “The principles that could be extracted from this study, combining hydrological modeling and satellite data and behavior modeling for transboundary issues for example, could be replicated elsewhere.”

Professors Alan Hamlet and Ashish Sharma are working on a second project. They are doing high resolution climate modeling for Bangladesh, which requires expensive computers that many Bangladeshi researchers do not have access to. Information derived from these models will in turn affect the work of hydrologists, ecologists, and public health experts in Bangladesh. In particular many people in Bangladesh are concerned with how climate change will affect monsoon rains, which the country relies on for irrigating its many rice patties.

A third collaboration, through the ECK Institute of Global Health, will focus on issues around malaria in Bangladesh.

These projects are getting off the ground quickly because the trip infused an excitement in the researchers. Professor Tank explained, “Now we are doing this internal proposal process and there was no one procrastinating or pushing deadlines. Everyone just jumped right in because we’re excited about it because we experienced this extraordinary thing together.”

For the most part the crew from Notre Dame filled their schedule with visits to universities, think tanks and large NGOs, but one afternoon Father Thomas, a Holy Cross priest, brought them to a place close to his heart -- a school in the heart of one of Dhaka’s slums that serves the poorest of the poor. The man who runs the school shared that his primary goal is to feed the students because he remembers being so hungry as a child that he was unable to learn.The Notre Dame professors were blown away by the school. Here were children, who under most situations would not be able to read, but because of this man’s stubbornness and hard work by the age of thirteen or fourteen most were not only able to read proficiently but were also conversationally fluent in English.

The professors learned that due to a recent exodus of westerners from Dhaka, this school had lost most of its funding sources and was in debt and in danger of closing. The professors were able to on the spot gather enough money between them to clear the school’s debt and insure its continuation for at least a time. They hope to establish a more lasting connection to the school to insure its survival.

To Professor Bolster an important aspect of building international collaborations is that they contribute to international understanding:

“Culturally the world is very diverse, but everywhere I’ve been at the end of the day people want the same thing. They want to be able to get a job so that they can feed their family and they want to be able to live their life. Whether that’s the guy who’s riding the rickshaw in Bangladesh or me here as a professor, there is that universality. And I think it is really important that we see each other that way.”

Originally published by Marijke Wijnen at ceees.nd.edu on May 8, 2017.