On a spring morning in New Hampshire, 2,000 years ago, sunlight struck a black cherry tree, opening its white-and-yellow blossoms. As the tree swayed gently in breeze, spiky, spherical pollen grains spilled out of its flowers, and floated up through the limbs and leaves of the canopy, before drifting down to the still surface of a nearby lake. Cool water stalled the pollen’s descent, but still, it kept falling, riding the currents all the way to the lake’s bottom, where it mixed with silt and slowly hardened into sediment.

Time piled new layers of mud and soil atop the pollen, pushing it deeper into the Earth. For two millennia, it continued to sink at that geologic pace, until suddenly, and with some violence, it was slurped up to the surface, through an aluminum tube.

Sitting on a floating platform, a small team of scientists pulled the pollen up as part of a cylinder of sediment, a core bored out of the lake bottom. A core looks like nothing more than a cross-section of muck, but each of its sedimentary slices is an archive, packed with fragments of sticks and leaves, charred remains of wood—and enough pollen grains to census the trees that once surrounded the lake.

Scientists are keen to complete this census. A forest’s mix of trees tells you something about its climate. And if you know how that tree mix fluctuates over 20 centuries, you can get a sense for the deeper rhythms of the Earth system.

To that end, a team of researchers is currently analyzing lake sediment data from more than a thousand sites across the Northeastern United States, with plans to expand to the entire planet. And they’re sampling more than just lake sediments. The pollen counts are part of a larger synthesis—the Paleon Project—a data-fueled attempt to understand our planet’s future, by first understanding its past. It’s a timely effort, coincident with the advent of radical planetary change. Predictions about Earth’s climate have never been so consequential. The Paleon team hopes to ground them in a deeper understanding of nature.

The Paleon Project was launched in 2011 by a small team of scientists, led by Jason McLachlan, an associate professor of paleoecology at Notre Dame. McLachlan told me there are now more than 100 collaborators on the team, including tree ring specialists, fire ecologists, hydrologists, statisticians, and computer modeling experts. “I’m gregarious, so as soon as I meet someone and they show interest, I rope them in,” McLachlan said.

When scientists predict the future of Earth’s climate, they rely on rich data sources. One of the richest is a global network of “flux towers.” Twice as tall as the most imposing coastal redwoods, but with none of the aesthetic appeal, the largest of these flux towers look like they were built with erector sets. Each has scores of sensors positioned at different heights, in order to sample the surrounding air for radiation, dust, carbon dioxide and water vapor. They measure everything from temperature to atmospheric chemistry to snow depth, and they do it often. Many of these readings are taken several times per second. 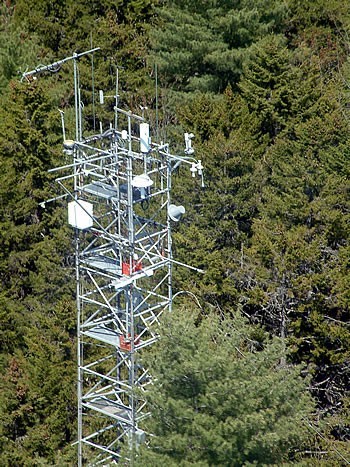 Flux towers have given climate scientists a sophisticated understanding of global climate dynamics. “They’re amazing,” McLachlan told me. “They can tell you how a passing cloud affects photosynthesis.”

But data from flux towers only goes back 30 years, which is worrying if you’re in the business of making far-seeing climate models, like those used to inform the Intergovernmental Panel on Climate Change (IPCC) report, or projections about the climate of the year 2100. McLachlan told me he wants to “pull those models slowly back into the past,” so that they “have the wisdom of the aggregated data” from more ancient sources.

McLachlan’s team is starting with the Northeastern United States, where there’s a long history of collecting paleoecological data, and where there are quite a few lakes. “A lake is like a little garbage bin that catches all the things that are flying around the air,” he told me. That includes pollen from trees, but also charcoal from forest fires. The more charcoal in a lake sediment layer, the more frequent the forest fires in that time slice, and the more likely that local trees were stricken by drought.

The team is cross-checking the lake data by pulling sediment cores from nearby bogs. They’re inspecting each bog layer for testate amoebae, single-celled organisms whose populations wax and wane with the climate. They’re consulting tree ring chronologies, because trees tune their growth to the local environment, meaning the width of each ring is a kind of seasonal thermometer. They’re also poring over land surveys from the Colonial period.

“This data is like a snapshot of what was there right before the axe and plow came.”

The earliest of these surveys were completed in the 17th century, during a revolutionary moment in North America’s ecological history. “We’re trying to understand how our current world works, but the world that we’re looking at is unusual, because it’s been transformed by industrial society,” McLachlan told me. “We know that Native Americans manipulated the landscape. It’s not like it was natural back in 1491. But even so, it’s very different now. This data is like a snapshot of what was there right before the axe and plow came.”

The land surveys allow the researchers to peer back in time, to see forests advancing across a landscape, and then receding, all over a period of centuries. “The surveyors were fussy guys, but unknowingly, they took really useful ecological data,” McLachlan told me. “They would walk a straight line into the forest, and when they got to a half mile in, they would put a post there and they would measure the distance between four of the nearest trees, which tells you the tree density. And they would note the species.”

Dozens of undergraduate students are currently digitizing the old land surveys. “It’s the ugliest stuff you’ve ever seen,” McLachlan said. “It’s thousands of pages of spidery handwriting. Some of it’s funny, because there are little old-timey notes about how unhappy the surveyors were. But overall, it’s grinding work.”

As the team expands to the entire planet, there won’t be land surveys available everywhere. They’ll have to improvise with new data sources. Already, they’re collecting data in Alaska, to make sure their methods are robust across different biomes. “If you map out the climate space in the Upper Midwest and Northeast of the U.S., you get a lot of variability. You get everything from the open plains to the boreal forest,” McLachlan said. “But if you include Central Alaska, then you get the tundra, and so you can see all kinds of different dynamics and processes at work.”

The natural next step might be Europe, where scientists have spent decades assembling paleoecological data sets. Or the American Southwest, where there are tree-ring chronologies that stretch back more than ten millennia. Either way, one hopes that Paleon is the foundation stone of a larger human project, a grand scientific synthesis that joins the dynamics of the chaotic present with the trends that operate on geologic—or even cosmic—time scales. If it were only an intellectual exercise, it would still be worth doing. But of course, it is much more than that.

Originally published by Ross Andersen at www.theatlantic.com on March 21, 2016.