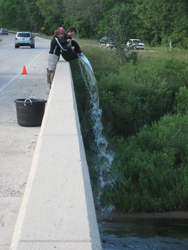 This summer, a group of scientists are studying five large rivers in the Midwest… including the St. Joseph, the Muskegon and the Manistee rivers in Michigan. It’s part of a three year study of how large rivers process fertilizers – and how things like farming and wastewater affect the rivers.

Tom Kramer spent some time with this group that calls themselves “The River Gypsies”:

The forecast says there is a 50/50 chance of thunderstorms, but the River Gypsies can’t slow down for a little rain.

This group of 13 scientists, PhDs, grad students and undergrads has had three weeks to study five rivers in two states – packing up and moving to a new campground every three or four days. Picnic tables have become temporary laboratories.

Jennifer Tank, a professor at Notre Dame, says one of her students wasn’t all that prepared for this nomadic lifestyle.

“Now he did bring a Samsonite suitcase that weighs about 100 pounds into the field with him, but I know that next year he’ll have a great dry bag… so he’s learning as he goes along.”

They’re collecting data on rivers ranging from pristine and crystal clear, to cloudy with mud and debris, and rivers that flow through farm fields and cities.

The goal is to determine how well these rivers remove or retain nutrients from the water. Specifically: nitrogen and phosphorus.

Too much can lead to excessive plant growth and the loss of oxygen in the water – impacting aquatic life.

Tank says for years, people have assumed rivers like the Manistee act like pipes carrying water and everything in it from beginning to end.

“We dump in our effluent. We let our agricultural runoff come into these systems. Because that’s what rivers do, they move stuff downstream. They are these pipes. But what we didn’t know is just how biologically reactive are these pipes. ”

And before now, there wasn’t a study that looked at how a large river processes nutrients. What this team does is introduce nutrients into the river and use sensors to measure how far downriver those nutrients travel.

Bob Hall is a professor at the University of Wyoming. He’s checking some of the instruments tied to some submerged limbs along the river.

“So here are three sensors, two of them are measuring oxygen concentrations every five minutes.”

The level of oxygen in the water confirms what they’ve come to expect. Jennifer Tank says rivers do remove a good deal of nutrients from the water.

“We probably were overestimating just how much was getting downstream or downriver at the mouth of a watershed. We were underestimating the potential role of the river.”

That means with all of that lawn fertilizer and wastewater pumped into rivers, much more of the nutrients are retained by the river than previously thought… and less makes it to the end of the river.

Tank says this means we need to manage these rivers for their nutrient uptake, not just recreation or scenic beauty.

“We owe it to the environment to manage the nutrients effectively. And not just use these as pipes to transport it to the middle of Lake Michigan.”

A few days after arriving on the Manistee River, the data is collected, the tents are folded and the caravan continues.

And next summer, the River Gypsies will be at it again.

They’ll be back out west studying five rivers in five weeks in three states.

For the Environment Report, I’m Tom Kramer in Manistee County.