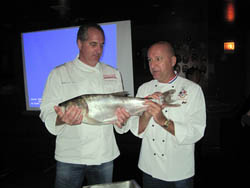 Summary:
Two species of Asian carp, bighead and silver carp, have been swimming their way north toward the Great Lakes for decades. A lot of people are trying to keep the carp out of the Lakes.

Yesterday, attorneys general from around the country announced they’re putting more pressure on Congress to speed up action on Asian carp.

Some people think one solution is to create a market for the fish.

There are a couple of companies working to sell Asian carp to China... where the fish are considered a delicacy.

But winning over the American palate is much harder. Carp have a bit of an image problem...and they are full of bones.

“We are spoiled here, we like convenience. Everybody expects to have fish without bones, right? And that’s the issue.”

This is Chef Phillipe Parola. He’s from Baton Rouge and he wants you to learn to love Asian carp.

Parola is one of the chefs who tried to get Americans to eat nutria. Nutria look like oversized rats. So that didn’t go over so well.

Two years ago, Chef Parola found his new calling. He was out fishing in Louisiana, where the Asian carp are thick.

“With ten minutes, this fish started jumping everywhere. I’m like, what in the heck! Two of them, one after the other, landed right at my feet.”

He kept the giant carp, put them on ice, and took them home.

“To my surprise, when I saw the meat, as a professional chef, I knew right on that there’s no way that this fish could be bad, literally. When I went and cooked it, I'm going to tell you, it tasted between scallops and crab meat, there is no doubt.”

He’s learned to steam the fish to remove the bones. He’s working with his business partner, Chef Tim Creehan, to launch a processed Asian carp product to sell in grocery stores. They’ve even changed its name to make it more appealing. They’re calling it Silverfin.

At the Dragonfly Mandarin restaurant in Chicago, the chefs are filleting a bighead carp for an audience of reporters.

“And you've got the best, most beautiful flesh, it’s white, it’s appetizing! It’s a fish!”

And Chef Tim Creehan talked us into eating some carp.

“We went ahead and mixed these with béchamel French cream sauce, a little bit of cheese in it, used it to bind the cake, simply coated it with bread crumbs, and pan fried it, we’re serving it with a little spicy béarnaise sauce.”

It was pretty good. It didn’t taste fishy... it was similar to a crabcake. I’m not sure if it was the pan frying, or the buttery sauce... but it was surprising... and not in a bad way.

Now, to be clear, the chefs don’t see this as a way to get rid of the Asian carp. In fact, Chef Parola believes the carp are here to stay... which of course, could be good for business. And this is where environmentalists and many scientists want to tread with caution.

David Lodge is a biologist at the University of Notre Dame.

“It’s always reasonable to make lemonade out of lemons. We have to be careful about how that’s described. It can at best be a contributor to a solution, it can’t be the solution.”

He says if a commercial harvest of Asian carp takes off... and people build an industry on the fish... there could be incentives to keep the carp around.

“Markets are not always compatible with the goal of eradicating a fish. So to drive the populations to a low abundance, there will have to be something other than purely a profit driven program.”

So even if Chefs Parola and Creehan can win over picky Americans with their silverfin cakes and fillets... it won’t be the end of the story of our Asian carp invasion.