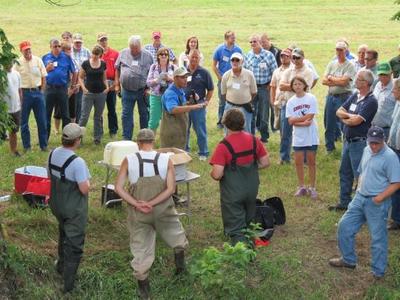 A long-running experiment to improve water quality in and around Livingston County has yielded encouraging results.  As farmers within the Indian Creek Watershed adopted more efficient methods of managing their nutrients, analyses of water samples collected between 2010 and 2015 are showing a positive impact on nutrient losses within the region.

The Indian Creek Watershed Project was initiated bythe Conservation Technology Information Center (CTIC) to demonstrate the effectiveness of best management practices (BMPs) on mitigating nutrient losses.  By partnering with a large coalition of stakeholders, the Project was able to increase implementation of BMPs from seven percent to 57 percent of the watershed’s area.  The most common BMPs adopted by farmers within the watershed were in-field nutrient management practices.

“Local involvement and local assistance leads to practice adoption, which was critical to success,” Chad Watts, Project Director at CTIC said.  The Project also received support from the Illinois EPA, ag research groups such as Illinois NREC, and agribusinesses.  “Corporations supplied not only funding, but expertise, technology, and people,” Watts added.

University of Notre Dame researchers Jennifer Tank and Ursula Mahl analyzed the data from samples that were regularly collected over the duration of the Project, along with the data from continuous nitrate monitoring devices.  Their findings indicate the BMPs farmers within the Indian Creek Watershed used may have reduced nitrate losses, particularly during storm events.

“Nitrates losses are higher during runoff events such as storms,” Mahl said, “However, we’re seeing an improvement in nitrate losses around storms with this system.”

“During greater water export years such as ’13, ’14, and ’15, one would expect we’d get a greater movement of nitrogen,” Watts added, “Which we’re not seeing.”

CTIC, which spearheaded the Indian Creek Watershed Project, is an Indiana-based non-profit organization that promotes sustainable agricultural systems and technologies.  The Project was sponsored in 2010 by a grant from the Illinois EPA, with funds from the Clean Water Act.

To obtain its goal of increasing BMP usage to more than 50 percent of the watershed area, CTIC held a series of educational tours and public meetings within the watershed and contacted every farmer within the area.

Although the initial scope of the Indian Creek Watershed Project has been completed, CTIC continues its work in the area.  The organization is partnering with other groups to further improve water quality along the Vermilion River.