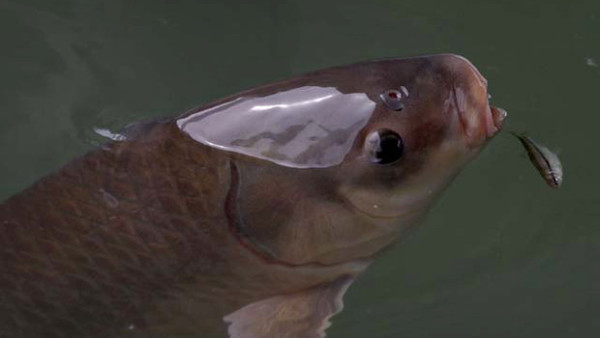 TRAVERSE CITY, Mich. (AP) — Plant-gorging grass carp probably could survive in all of the Great Lakes, scientists said Monday, adding that if the fish get established, they might significantly damage the environment.

The fight to prevent Asian carp from reaching the inland seas has focused primarily on bighead and silver carp, which eat huge amounts of plankton, the foundation of aquatic food chains. They have infested much of the Mississippi River basin and are threatening to reach the Great Lakes through rivers and canals, leading the government to spend more than $200 million on measures to keep them out.

Grass carp have drawn less attention because they feed on plants, including nuisance weeds that choke boat motors and overwhelm native vegetation. Introduced in the U.S. in 1963 for pond and lake maintenance, the fish were distributed widely with the blessing of state and federal agencies; they’ve now been reported in 45 states.

Researchers documented for the first time last year that grass carp had spawned successfully in the Great Lakes, based on an analysis of four fish captured in Ohio’s Sandusky River, a tributary of Lake Erie.

In a paper published online this month by the Canadian Journal of Fisheries and Aquatic Sciences, researchers said 45 grass carp are known to have been caught in the Great Lakes basin between 2007-12. Some were found in Lake Erie, others in tributaries of the lakes.

About half of those caught could reproduce, which could mean the lakes already have a breeding population, the report said, although there are other possible explanations, such as illegal stocking.

The researchers also surveyed scientific reports as far back as the 1930s showing that where grass carp have been introduced, they’ve mowed down a wide variety of plants and even algae.

“They’ll eat pretty much anything,” said lead author Marion Wittmann of the University of Notre Dame. “I think of them as like sheep or goats; they’ll come in and munch what’s in front of them.”

That bodes ill for wetland vegetation that provides spawning grounds and habitat for young fish, Wittmann said. Largemouth bass and bluegill are among species that have fared poorly in places infested with grass carp. Ducks and other waterfowl that nest in wetlands also could be vulnerable.

The study also found that grass carp could live in all five of the lakes based on the region’s climate, although more work is needed to determine whether all the lakes have sufficient food supplies.

A hurdle to keeping the carp out of the Great Lakes is the patchwork quilt of policies and regulations, Wittmann said. Unlike bighead and silver carp, they are not illegal to possess under federal law. The fish is banned in Michigan and Minnesota; in Wisconsin, they can be used only for research. But the five other Great Lakes states — Illinois, Indiana, Ohio, Pennsylvania and New York — allow their use with special permits.

“We’d like to the see the Great Lakes states harmonize their policies,” said Tammy Newcomb, senior water policy adviser with the Michigan Department of Natural Resources.

The U.S. Fish and Wildlife Service tests grass carp at producer facilities to make sure they’ve been sterilized before they are shipped to customers, such as reservoir managers or homeowner associations around private lakes. The inspections are not mandatory under federal law.

But even in Michigan, where the fish have been banned since the late 1970s, grass carp turned up in an inland lake in 2012. They were very old and apparently stocked many years ago, Newcomb said.

The study shows the importance of being vigilant but doesn’t suggest a need for emergency actions to ward off a grass carp invasion, Newcomb said.

“The house isn’t on fire as much as I’d feel like if we were finding reproducing bighead and silver carp in the Great Lakes,” Newcomb said.

(© Copyright 2014 The Associated Press. All Rights Reserved. This material may not be published, broadcast, rewritten or redistributed.)