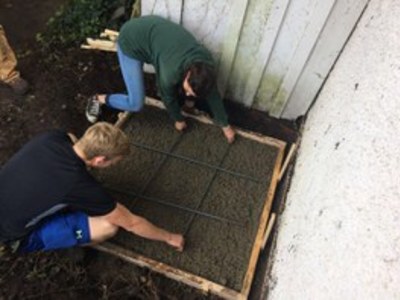 Last fall, a handful of Notre Dame engineering students found themselves in Professor Alan Hamlet’s backyard pouring a concrete well pad. The well in question, however, is over six thousand miles away in Sangmelima, Cameroon. Professor Hamlet simply offered up a corner of his yard, so these students could practice techniques that in two months time they used on an Engineers without Borders’ trip to the Cameroon.

Sangmelima resident, Hanna N-Mokake (Ma Hannah), initiated this project because she suspected that contaminated drinking water was responsible for the high rate of illness among students at Alfred and Sarah Bilingual Academy in Sangmelima. Worried about the affects the water was having on students’ health and ability to learn, she reached out to the broader community for help. Notre Dame students agreed to take on the challenge.

After an initial assessment trip that included testing water samples, students decided that the best way to address the problem of contaminated drinking water was constructing a new well that could serve the school of over 200 and the surrounding village of 2,000.

Notre Dame students along with their advisors have finished designing the well and a contractor they found in Cameroon is currently hard at work digging. This winter, they visited Sangmelima for a third time to complete the project they’ve been dreaming about and working on for over two years.

In particular they focused on the finishing touches of construction that are often overlooked but crucial to durability. One piece is building a level concrete pad around the well and pump to prevent water from accumulating in such a way that deteriorates the structure and allows microbes to proliferate.

This winter students also worked with the community to designate leadership roles to assure proper maintenance of the well. Sophomore engineering student, Kevin Dingens emphasizes, “we want to make sure that the project is not only physically sustainable, but also socially sustainable.” 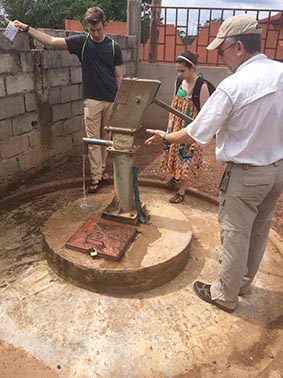 For Notre Dame’s Engineers Without Borders Club, the well is just the beginning of their relationship to Sangmelima. To Dingens continuity is important: “We plan on staying with this community as long as possible. We’re not just the engineers that build something and leave.”

Students are already dreaming up future projects to undertake. The options seem limitless. The school of over two hundred students only has one latrine. Other ideas include building a rainwater harvesting system, installing hand washing stations, or constructing dorms for the teachers. With enough student momentum, Notre Dame’s Engineers without Borders’ club could foreseeably complete all of these projects. And club members are hopeful that momentum will continue to build. For the students who throw themselves into the work, the reward is incredible and the work becomes almost addicting. Dingens commented: “We’re a club that pairs our major with a vocation for service.”

Originally published by Marijke Wijnen at ceees.nd.edu on November 19, 2016.