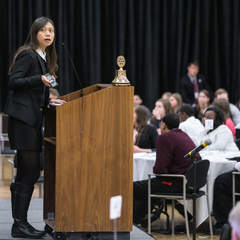 HAMMOND — The suggested solutions ran the gamut: Plant more trees, increase public transportation options, require cleaner-burning fuels, decrease the use of pesticides in farming, encourage urban gardens, and use solar panels to save on electricity bills.

Those were just a few of the ideas to combat global climate change that were discussed Friday by more than 200 high school students at the Rotary World Affairs Conference at Purdue University Calumet.

Students from across Northwest Indiana gathered to hear from experts in the field about the effects of climate change on the world.

Otto Doering, director of the Purdue Climate Change Research Center, discussed how more than 60 experts in various fields — economics, agriculture, earth science, engineering, genetics and more — conduct research around the globe on how climate change impacts everything from humans to clouds.

“Why is climate change controversial?” Doering said. “Because it involves economics and politics, and it is costly to change in economic terms. Also, a number of countries would have to come together and speak with one voice, and international cooperation is very difficult.”

Coal-fired power plants are rapidly being retired in the United States, in part because of their greenhouse gas emission levels. But China has made up for that with its pace of new construction, said Doering, who was one of the contributing authors to a report by the Intergovernmental Panel on Climate Change, which won the Nobel Peace Prize in 2007.

Climate change is showing in multiple ways, from the re-emergence of malaria-infected mosquitoes in the southern United States to increased funds being devoted to the U.S. Forest Service to fight wildfires in drought-plagued areas.

Doering said the growing season for Indiana farmers has increased by seven to 10 days over the past 30 years, and extreme heat makes it more difficult for corn to pollinate.

“We do not tell you what the right policy choices are, but we are getting the science together to discover the potential choices,” he said.

Many of the students were chosen by history, government or science teachers to attend the conference.

“It’s interesting because this is something that will affect us in the future,” Raab said.

“I really like that we heard contrasting viewpoints,” Kowalski said.

“We are a coal state, and I’m told by physicists that you need a certain amount of coal to make steel,” he said. “But we have the opportunity to make a generational impact by recapturing the lakeshore ... and extending the South Shore commuter train line to connect us to that great city-state of Chicago.”

He encouraged the students to talk to their parents or talk to local officials about the South Shore project.

Notre Dame professor Chen Chen discussed the areas around the world that are being most affected by rising temperatures, zeroing in on Sub-Saharan Africa.

“Around 70 percent of these people are rural farmers and they live a hand-to-mouth existence, but climate change could make growing crops and making a living impossible,” he said.

Chen said climate change can exacerbate already existing issues, such as in South Sudan where flooding occurs but there still is very limited water access.

PUC political science professor Richard Rupp urged students to learn what life is like in other countries, such as Zambia, Haiti or Vietnam.

“That’s where your education is really going to take off,” he said.