The concept that biodiversity feeds upon itself is not uncommon in the world of evolution. The problem is a lack of hard data that shows this process to be naturally occurring. 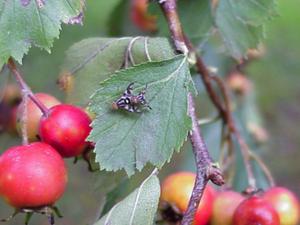 However, recent research by a team of scientists, including a Michigan State University entomologist, finds that recent evolutionary changes – in this case in a new species of fruit fly – have an almost domino effect on a number of species.

The research, published this week in the Proceedings of the National Academy of Sciences, follows up work done by the team several years ago that found changes in mating habits resulted not only in a new species of fruit fly, but also led to a new species of the parasitic wasps that prey on them.

The fruit flies in question evolved into new species when they began laying their eggs and mating on apple trees, as opposed to their native hawthorn tree hosts. Three different kinds of parasitoid wasps were collected from a number of different fly host plant environments in the wild.

Analyses in the lab showed that all three of the different kinds of wasps had diverged from others of the same kind, both genetically and with respect to host-associated physiology and behavior.

“In a sense,” Smith said, “they have caught an entire community of parasitoids actively ecologically diverging in response to a historically documented host plant shift of their fly host.”

These evolutionary changes, known as “sequential” or “cascading” events, may provide additional information helping explain why some groups of organisms, such as plants, the insects that feed on them and the parasites that attack the insects, are more diverse and species-rich than other groups.

“Why are there so many insect species?” Smith asked. “Speciation cascades provide one explanation for how a lot of species might be generated in a relatively short period of time.”