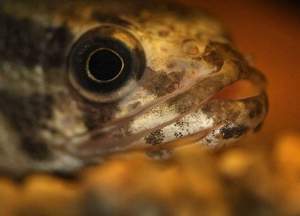 If you think Asian carp might wreak havoc on the Great Lakes, meet the northern snakehead fish.

Along with Asian carp, the torpedo-shaped fish is considered one of 10 invasive species at high risk of invading the Great Lakes from the Mississippi River Basin. The fish raises fear because it can survive icy winters, ravenously preys on other fish, breathes air and can live out of water for several days if it remains moist.

The fish can even wiggle and flop short distances across land in search of new waters.

The fish have now been found in at least nine states as far apart as California and Maryland, and they're breeding and spreading in the Potomac River despite efforts to eradicate them. They also been have been found spreading in Arkansas, near where Asian carp escaped some 30 years ago and began spreading in the Mississippi River. Despite the largest eradication effort in the nation in Arkansas, snakehead still are being found, and local fish biologists think they already may have escaped into rivers leading to the Mississippi.

"It's a matter of time before they get into ... other states," said Lee Holt, who helped lead the eradication effort in Arkansas two years ago that was only partly successful.

But like a national strategy to battle Asian carp that has languished for lack of funding, a plan to control the snakehead also remains on the shelf.

BRINKLEY, Ark. -- On a quiet Friday afternoon in April 2008, Lee Holt got a call from local farmer 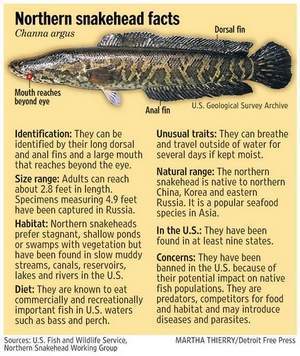 "He was adamant he had something that was not a native fish," said Holt, a biologist with the Arkansas Game and Fish Commission.

Holt told Bonner to hang on to it and he would come take a look. He took along a book on the northern snakehead, an invasive fish native to Asia and Russia that had shown up in several places in the U.S.

Once he saw the torpedo-shaped fish inside Bonner's bucket, he knew that's what it was, just as Bonner had suspected after looking up his specimen on the Internet. Bonner told Holt he had found his fish wiggling along on a gravel road near a flooded culvert.

Holt called Walt Courtenay, a national expert on the fish and the author of the book. "Walt had one word to say: 'Damn,' " Holt recalled.

Since then, Holt, who helped lead the nation's biggest effort to date to try to get rid of snakeheads, has learned plenty more about the fish.

Snakeheads were named last year by Time magazine as one of the nation's top 10 invasive species, along with the kudzu plant, killer bees and zebra mussels. A study released last month listed northern snakehead as one of 10 invasive species at high risk of invading the Great Lakes from the Mississippi River Basin, through the Chicago Sanitary and Ship Canal and its connected rivers. That's the path that Asian carp -- which are breeding 115 miles from an electric barrier that separates the canal from Lake Michigan -- have followed, and snakeheads could do the same, the study noted.

The fear is that the northern snakehead, which has few predators and voraciously eats other fish, could obliterate some native fish.

"Snakeheads are nasty things," said Marc Gaden, spokesman for the Great Lakes Fishery Commission, which is concerned about the spread of snakeheads. It's more proof that closing off the Chicago canal from Lake Michigan is needed -- to keep carp, snakeheads and many other invasive species out, he said.

Snakeheads have earned an especially fierce reputation through sci-fi B movies such as "Frankenfish," in which walking giant fish emerge to tear humans to bloody pieces.

That's wildly exaggerated science fiction, of course, but biologists find snakeheads worrisome because of abilities most native fish don't have: They breathe air, can tolerate a wide range of temperatures including winter ice, can wiggle across mud or the edges of ditches in search of new waters, and can live outside of water for several days if they stay moist. When Bonner found the fish wriggling on the road, he threw it in the back of a truck. A day later, someone went to dispose of the fish and found it still alive.

Snakeheads release thousands of eggs, spawn several times a year and guard the nests of their young, which helps their survival rates.

There are 29 species of snakehead, but only the northern snakehead can live in cold climates. The fish is known to be able to survive under ice.

Northern snakeheads were widely available in pet stores and Asian fish markets between the mid-1990s and 2002, when importing, selling or moving any of the species across state lines alive was banned by the federal government. That law was passed shortly after a colony of breeding northern snakeheads was found in a pond in Crofton, Md., where someone had dumped a pair four years earlier. Like other invasive species banned under the federal Lacey Act, the snakeheads were deemed a danger to native species.

Canadian scientists with the Department of Fisheries and Oceans studied the risk in 2005 and concluded that northern snakehead could live throughout the Great Lakes and most of Canada. Based on how quickly the fish have spread when released into the wild in other parts of the world, "there is little doubt that the northern snakehead has the potential to significantly impact native fish populations due to their voracious predatory feeding style" and competition with other fish, the report said.

It said snakeheads would be happiest in Lakes Erie and St. Clair because they prefer shallow lakes with heavy vegetation along the shorelines, which both lakes have.

Even though they are banned, snakeheads are still illegally traded.

More than 50,000 snakeheads came into the U.S. between 1997 and 2002, before they were banned, according to a report by the U.S. Fish and Wildlife Service. After the ban, between 2002 and 2006, federal agents confiscated more than 1,000 illegal snakeheads of all kinds in nine shipments, the largest from Nigeria, the wildlife service said.

In April, a Brooklyn, N.Y., fish marketer was discovered to have illegally imported nearly 4,000 northern snakeheads, disguising them as a different fish and selling them at a local market. Many anglers who have caught them in the wild say the fish are tasty, and they're sold in Asian markets for soups and whole fish dishes. They are not as bony as Asian carp.

It's illegal to possess the fish in many states, including Michigan.

Since the first breeding snakeheads showed up in Maryland, where they were eradicated completely from several ponds with the fish poison rotenone, more breeding snakeheads have been found, including an established colony in the Potomac River that continues to spread. Pennsylvania, Massachusetts, Virginia and New York also have colonies. Scientists say the fish were bought as food or pets and then released.

Earlier this month, snakeheads were found in a new river in Virginia. In that state, biologists decided it was impossible to eradicate northern snakeheads from the Potomac and neighboring rivers and instead encouraged anglers to catch and kill them. In Maryland, the state is offering prizes such as fishing gear for anglers who catch and kill snakeheads and post their photos on a Web site.

There is a draft national control and management plan for northern snakehead, which Congress requested in 2006 when it became clear snakeheads were spreading from the Potomac River. The plan calls for further study, education of the public and enforcing existing laws.

But as in the case of a national strategy created by a task force in 2007 to control Asian carp, Congress hasn't appropriated funding for the plan and states are left to fend for themselves.

In Arkansas, the 2008 discovery of a northern snakehead led to an all-out war.

"We wanted to be proactive because Arkansas already has a black eye from the introduction of Asian carp," said biologist Holt, referring to the escape of Asian carp from farms and research facilities in Arkansas in the 1970s.

The snakehead Bonner found came from a fish farm about a mile away. Sometime around 2000, fish farmer Jack Dunn told Mike Freeze, chairman of the Arkansas Game and Fish Commission at the time, that an Asian man had sent him some snakeheads and offered to pay $6 to $7 per pound if the farmer would raise them. That was good money, given that catfish, commonly raised at local farms, fetched $2 or less per pound.

He later gave some of the fish to Freeze, who wasn't sure what they were. "We sent samples to an expert in Florida, and he told us they were snakeheads," Freeze said.

Freeze said he and others called Dunn to warn him that the federal government was thinking of blacklisting the fish by adding them to the Lacey Act list, making transporting them anywhere outside Arkansas illegal. "I also told him, 'You don't want these, they'll eat your other fish,' " Freeze recalled.

The timing isn't clear, but at some point, Dunn did get rid of his snakeheads, or thought he did. He told Freeze he harvested them all from his ponds and laid them up on the pond banks to die. Some likely flopped into nearby ditches.

By 2008, they were all over nearby Piney Creek. Dunn, who has since died, was the only known source of snakeheads in Arkansas, Freeze said. He noted that Dunn did nothing illegal, since his actions came while the fish was still legal.

A few days after the discovery of farmer Bonner's fish in 2008, Arkansas biologists hunting in nearby ditches and culverts found 90 more. They began organizing Operation Mongoose to try to keep the snakeheads from spreading further.

In March 2009, they hit 400 miles of local waterways with the rotenone in a $750,000, eight-day blitz by helicopter and boat, and recovered more than 700 snakeheads. Since then, though, they have found more than 50 in some of the locations they poisoned.

Biologist Farwick said his greatest fear is that the fish already have moved into rivers that lead to the Mississippi. Still, suppressing their numbers was useful, he said.

Unfortunately, it's an ongoing job. "The floods this spring are definitely going to make it hard for us," said biologist Holt.

In testimony to Congress in 2009, noted Notre Dame biology professor David Lodge mentioned Operation Mongoose as an example of how difficult and expensive it is to try to control invasive species after they've arrived.

Instead, the snakehead, like Asian carp, Burmese pythons and a long list of other imported species, show that the nation needs a new immigration policy when it comes to animals, which should be evaluated before they are allowed, he said.

"It is ironic that with all the talk and effort to close our borders to bad food, bad drugs and terrorists, we continue to invite harmful alien plants and animals, unscreened, into our country," he said. "The door is wide open."