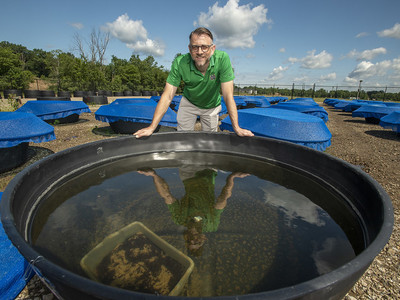 The study, developed in the lab of Jason Rohr, the Ludmilla F., Stephen J. and Robert T. Galla College Professor and Chair of the Department of Biological Sciences, was published recently in Nature Communications. Streamlining the process is important because there are many chemicals and a diversity of freshwater communities, so it is nearly impossible to test all possible combinations of chemicals and aquatic organisms for safety in a timely manner.

In addition to determining that the effects of pesticides were consistent with their types (those designed to target similar pests) and their chemical classes (those that share similarities in their chemical structures), first author Samantha Rumschlag, research assistant professor of biology, also revealed that the responses of freshwater species were similar within groups of organisms that serve similar ecological roles. For instance, insecticides increased mortality of predators, like insects and salamanders, which in turn benefited prey including tadpoles and snails.

“Because there are so many pesticides used in the U.S. and Europe, and because freshwater communities are so diverse, testing the environmental safety of these chemicals presents a real challenge to regulators,” Rumschlag said. “Seeing consistent effects of pesticides within pesticide classes and groups of organisms with similar ecological functions can help reduce the complexity of risk assessment of pesticides.”

The team tested the effects of 12 pesticides using 72, 1,000-liter tanks that replicated natural pond ecosystems. The broad spectrum of pesticides tested are among many of the most commonly used pesticides by the agriculture industry, like atrazine and malathion, and are members of two pesticide types (insecticides and herbicides) and four chemical classes.

“As follow-up work, we are looking at more than 70 different species and genera of algae to discover whether they too have consistent responses to pesticides, based on their different ecological roles,” Rumschlag said.

The results of the current study “reduce the complexity for the evaluation of new compounds, as well as understanding the impacts of already regulated compounds,” Rohr said, noting that previous regulatory work through the Environmental Protection Agency entailed studying organisms in communities, as was done in this experiment. Now, however, the agency assesses the safety of chemicals based predominantly on standard laboratory toxicity tests on just four model organism species, “so much of the safety under more natural settings is assessed after the fact,” Rohr said.

Funding was provided by the National Institutes of Health, the National Science Foundation, and the U.S. Department of Agriculture.

Originally published by Deanna Csomo McCool at science.nd.edu on December 17, 2020.