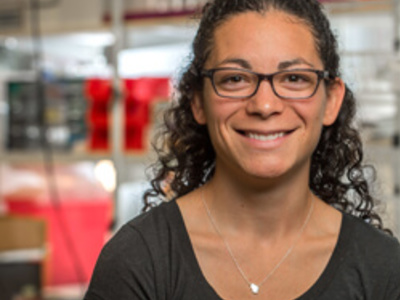 A national initiative is underway to ensure that the U.S. will meet its human resources needs in the fields of environmental science, engineering, mathematics, and technology. The EPA contributes to this national effort by encouraging and supporting environmental education for master’s and doctoral students. The STAR Graduate Fellowship aims to “defray the ever-increasing costs associated with studies leading to advanced degrees in environmental sciences,” providing funding for tuition, a monthly stipend, and an annual expense allowance.

Explaining her project, Shogren said, “We all shed our skin cells and hair, and thus leave a genetic signature of ourselves everywhere we go. Environmental DNA (or eDNA) is a technique that captures the genetic ‘cloud’ or ‘fingerprint’ that is left in the environment by an organism, like mucus sloughed from a fish. Originally developed at Notre Dame as part of an effort to track the movement of non-native Asian carp in the Chicago River waterways, eDNA detection is now being used successfully to identify invasive and rare species in lakes, streams, and rivers. Despite recent studies that demonstrate the efficacy of using eDNA for species surveillance, few studies have examined the biological and physical factors that impact how eDNA moves through flowing waters such as streams and rivers, so the aim is to fill that knowledge gap.”

Shogren added that “the overarching goal of the project is to improve the understanding of the transport, retention, and persistence of eDNA that is actively transported in streams and rivers using a combination of field and modeling approaches. This information is essential for not only detecting if a species is present, but where? And how many?” Shogren is a fourth-year doctoral candidate in the lab of Jennifer Tank, The Ludmilla F., Stephen J., and Robert T. Galla Professor of Biological Sciences.