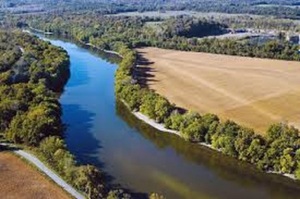 South Bend, Ind.) – A new program aimed at improving water quality in the nation’s heartland by using watershed-scale conservation to reduce nutrient runoff from farms has been recognized by the Obama Administration during the United Nations World Water Day Summit.

The program is a collaboration between the University of Notre Dame Environmental Change Initiative and Indiana University.

The idea is to plant cover crops in the winter so the roots will hold the soil in place and nutrients and fertilizer won’t run off into streams to contaminate the water.

Jennifer Tank, Environmental Change Initiative director and a professor in the Department of Biological Sciences, explained they have been studying two Indiana watersheds, in Kosciusko and Jasper counties.

“You get a burst of green and it’s keeping the soil nutrients on the fields, instead of having that stuff run off into the streams,” said Tank. “So, it’s really just using biology to keep nutrients where farmers intended them to be.”

It is a U.S. Department of Agriculture project that pays farmers to plant winter cover crops over four years, and to install two-stage ditches.

Tank said the next phase is to see if it will make economic sense for farmers.

“It does increase the workload and the uncertainty, and that’s really something that we have to acknowledge when we ask farmers to do these additional conservation practices,” she said. “It adds a lot to what they’re doing.”

Tank says planting winter crops is what farmers in past generations did – following Mother Nature’s guide.

“In all natural systems, you find river flood plains or stream flood plains help during storms. Our channelized ditches that drain the ag fields don’t have those and that means water runs off really quickly,” she explained. “And so, we’re not using Mother Nature’s approach very effectively.”

The project will last at least another year and Tank hopes it can then be used as a model for other states.

Orignally published by Veronica Carter at www.publicnewsservice.org on March 25, 2016.

Republished by Eagle Country 99.3 at www.eaglecountryonline.com on March 25, 2016.