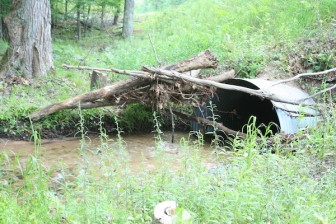 Replacing culverts with bridges may benefit fish because of improved connectivity of streams in a watershed, a pilot project in the Huron-Manistee National Forests shows.

But doing so also creates risks of more pathways for invasive species to spread and of fine sediments that can smother fish spawning beds, a study by U.S. Forest Service and University of Notre Dame scientists cautioned.

“These trade-offs need to be weighed on an individual basis,” said Nathan Evans, a doctoral student at Notre Dame and lead author of the study. “Each stream is different. The pros may outweigh the cons in one stream. The cons might outweigh the pros at other streams.”

It’s the first such study to examine changes in the similarity and differences between upstream and downstream fish species before and after culvert removal, Evans said, adding that environmental assessments before removing a culvert can help identify potential risks and benefits.

Meanwhile, the Michigan Department of Natural Resources is working with environmental and volunteer groups to inventory culverts across the state, with most of the Northern Lower Peninsula already counted. The tally so far is roughly 10,000, said Patrick Ertel, a Gaylord-based resource analyst in DNR’s Fisheries Division.

Bridges and steel or concrete culverts — essentially large pipes — are commonly used where roads cross waterways to let water flow uninterrupted downstream. Culverts are more likely than bridges to interfere with the passage of fish but are cheaper to build.

Ertel said, “On a watershed scale, having an inventory of all the culverts lets you scientifically prioritize your projects. That strengthens the argument for road commissions to get grants and target projects instead of ones that only look bad.”

By “bad,” he means culverts with “velocity barriers” — where water moves too swiftly for fish and other aquatic species to safety pass through — and “vertical barriers” that require a species to be a “strong jumper” to move upstream.

The new study in the journal Transactions of the American Fisheries Society stems from a 2011 project in which the Manistee County Road Commission used federal funds to replace three culverts with bridges over South Pine Creek, North Pine Creek and Hinton Creek, narrow, shallow streams located in the Huron-Manistee National Forests. For the next three years, scientists evaluated the project’s impact and found changes in the abundance and biomass of fish in the streams.

Among the findings: Downstream and upstream fish communities became more similar after culvert removal, although the mix and number of species — called “richness” — varied from year to year and creek to creek. 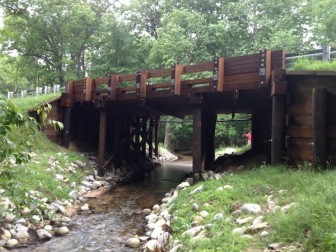 Study co-author Gary Lamberti, a biological sciences professor at Notre Dame, said, “We believe some of these effects play out over a long period of time.”

Species makeup varied too. Bluegill were caught before but not after culvert removal in Hinton Creek, for example, while researchers found chestnut lamprey and pumpkinseed after but not before the Hinton Creek culvert replacement.

While replacement of culverts with bridges often benefits fish populations, the study warned that increased connectivity “can enable the dispersal of nonnative species.”

Although the only non-native species found in North Pine, South Pine and Hinton creeks were trout and salmon, which are “desirable sport species,” research at other stream networks found a potential “to enhance the spread of nonnative and nuisance species such as sea lamprey in the Great Lakes,” the study said.

A number of culvert-related projects are underway around Michigan, including some in Grand Rapids, Gladwin County and the Keweenaw Peninsula. Others have been completed in Crawford and Presque Isle counties.

Chris Riley, a Manistee-based Forest Service fisheries biologist, said his agency is focusing on watersheds such as one along Bigelow Creek in Newaygo County rather than “doing a culvert here or there.”

A key question is how to set priorities, given the number of culverts and the cost of replacing them, he said.

For example, Manistee County Road Commission manager Mark Sohlden said his agency and the Forest Service are doing preliminary engineering and design work on replacement of a culvert with a timber bridge where Coates Highway crosses Arquilla Creek.

Notre Dame’s Lamberti said other ongoing research is examining another potential risk: contamination from big fish such as chinook and coho salmon that swim upstream from Lake Michigan to spawn.

Those fish may have mercury, polychlorinated biphenyls or other organic contaminants that may harm human health. When they die after spawning, their bodies can release those chemicals into the stream, Lamberti said.

Even so, he added, “Overall, an ecologist like myself would say connectivity is good.”

This story was produced by Capital News Service.