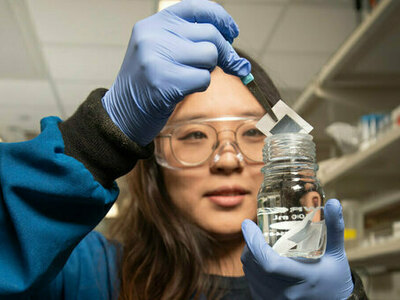 Chemical engineers at the University of Notre Dame have developed a highly effective filter for removing lead and other toxic heavy metals from water.

The new filter is sensitive enough to identify and capture one metal ion, even when mixed with a million other molecules, according to William Phillip, the Rooney Family Collegiate Chair of Engineering and director of the W.A.T.E.R. lab at Notre Dame.

Ph.D. student Jialing Xu began the research project by devising a way to 3D print a new filter — microlayer by microlayer — using a polymer solution enriched with carbon nanotubes as “ink.” When the filter was printed in a humid environment, nanopores with tiny polymer brushes developed within the layers. Xu then added a metal-ion-attracting agent, or ligand, to the filter. The result was a sponge-like surface that attracted and secured metal contaminants in the nanopores.

The results of the research, which are now available online, will appear in the October 2022 edition of the journal Matter.

“This exciting innovation gives us the ability to control the structure of the filter across multiple dimensions,” said Phillip. “After we’ve formed the structure, we can modify the pore chemistry to go after a series of different metal targets.”

A customizable and highly sensitive filter is important because so many kinds of toxic metals have been released into the environment by urbanization, mining, and aging infrastructures. Even a very small dose of a heavy metal contaminant is a major public health concern.

Also, unlike previous filters, which had to be discarded once they were clogged with heavy metal pollutants, the new filter can be rinsed and reused. Some of the contaminants the filter removes can even be recovered and recycled, Phillip said.

Cobalt, for instance, which can cause serious health problems when ingested at above average levels, also is an essential ingredient in making rechargeable batteries for electric cars.

“In many cases, the molecule you’re removing has value and can be recycled,” said Phillip.

“This suggests the new filters may have applications beyond addressing the global problem of metal in drinking water, such as recovering critical minerals from expired lithium ion batteries and outdated electronics.”

Collaborators on the research included Vivek Sharma at the University of Illinois-Chicago, who identified the benefit of adding carbon nanotubes to the polymer “ink.” Matthew Webber, professor of chemical and biomolecular engineering at Notre Dame, contributed by suggesting the use of the metal-ion attracting agent, which he had previously used in his lab for biomedical applications.

— Originally published by Karla Cruise on College of Engineering; photos by Wes Evard.

Originally published by Karla Cruise at research.nd.edu on August 31, 2022.