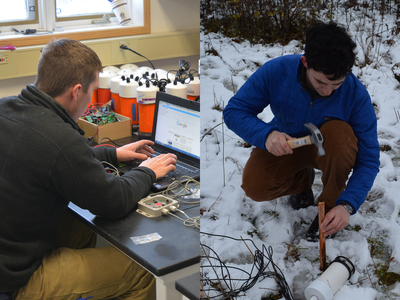 In the interview below, they discuss the sensors, what makes them unique, and what they see for the future as they are able to make them more widely available.

Q: Can you describe the data logger?

A: The data logger was created as an inexpensive device to measure temperature and snow depth.  It has been modified into a DIY soil temperature sensor which can be deployed broadly for the collection of large amounts of soil temperature data.  Both the hardware and the software of the sensors are open-source which is really important so that it is accessible.  Detailed videos of how to build and deploy the data loggers can be accessed in this series of tutorial youtube videos created by the Rocha Lab.

Q: What makes these sensors unique?

A: The sensors are very robust. They use standard AA batteries and can be set in the field to 2-5 years before the data is collected. Because they are inexpensive, you can deploy them in large numbers to collect data over large areas across environmental gradients.  Another feature is the DIY nature of the data logger. Students with no electronics experience are able to build and deploy the sensors, making them a great starting project for inexperienced students. It is also important that the data loggers use the open-source Arduino platform which makes it more accessible to students with little electronics or programming experience.

Q: What is a specific use case for these sensors from your lab?

A: The Rocha lab focuses on characterizing the effects of wildfire on climate forcing and vegetation recovery on the north slope of Alaska, an area of rapid environmental change.  The data loggers allow us to measure the changes in soil temperature in the permafrost in Alaska's large temporal and spatial scales.  This work is critical because thawing of the permafrost will have dramatic impacts on our planet such as the release of CO2 and methane gases which have a greenhouse warming effect on the plant.  The more we understand about the changes in these regions due to climate change, the better we can prepare for the impacts.

Q: How have these sensors contributed to global knowledge?

A: Our data loggers have contributed valuable data to SOILTEMP, which is a project initiated by Jonas Lambrechts and colleagues to create a global soil temperature database for use in ecological modeling.  This collaboration resulted in a 2020 paper in Global Change Biology by Lambrechts, et al. which describes the database which will contribute to an improved global understanding of microclimate and increase understanding of climate at fine spatial and temporal scales.

Q: How has being at Notre Dame facilitated this work?

A: Funding from ND-LEEF supported some of the groundwork, allowing us to deploy the data loggers at ND-LEEF and also set up cameras to take photos of snow depth.  It was one of the first tests of what the capabilities are.  ND-ECI also provided funding to Bethany Blakely a Rocha Lab Ph.D. graduate and us to provide courses to students at Adams High school, which focused on using electronics to measure environmental data and also developed kits for them to build their own sensor systems.

Q: What do you see for the future of this work?

A: We are currently working on a manuscript to publish the protocol to build and deploy the sensors to make them more widely available.  Sal wants to continue working on the development of the data logger, and continue to make improvements.  With each version of the sensor a lot is learned by observing how others interact with it.  These improvements will make it easier for other interested researchers to use this robust device.