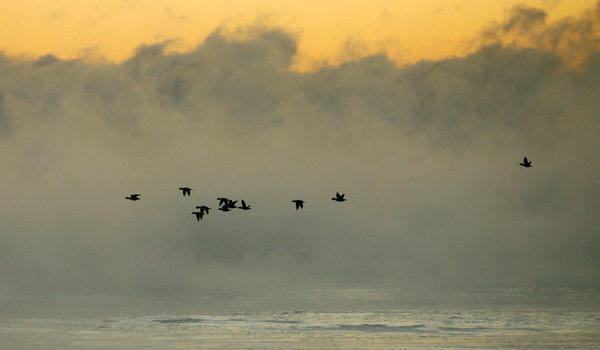 I grew up near Lake Michigan, one of the biggest lakes on the planet. My hometown of Waukesha, Wisconsin, about 15 miles west of Milwaukee, is making a bid to tap the lake for its permanent drinking supply. Long story short: Over the decades, Waukesha and nearby towns have withdrawn so much water from the region's deep aquifer, they’re now pulling up older water contaminated radium and salts.

But Waukesha can’t take one teaspoon out of Lake Michigan unless all eight of the Great Lakes states say it’s OK. Those are the rules under an agreement known as the Great Lakes Compact. The agreement didn’t get much press when George W. Bush signed it into law in 2008. The financial crisis dominated headlines then. But Peter Annin, author of "The Great Lakes Water Wars," says it was a big shift in the way we manage water.

“There was this idea in the early part of the last century that we can ship water to wherever the people are,” Annin says.

The compact rejects that idea. Annin compares the compact to a “legal water fence surrounding the Great Lakes basin.” He says it sends the message that “we’re going to keep the water inside the basin and if you want to use it, great. Come, enjoy it here, live here, build your factory here but the idea that we’re going to build canals and pipelines to take the water to wherever the people are has passed.”

Great Lakes policymakers and environmentalists say they have good reason to be protective. Over the decades, there have been a number of schemes to divert water to places far outside the Great Lakes basin. One that caused great alarm occurred in 1998. A Canadian entrepreneur proposed to ship Lake Superior water in bulk to Asia. By 2007, when then-presidential hopeful Bill Richardson of New Mexico hinted at transferring Great Lakes water to the Southwest, any doubts about the need for the regional agreement were shoved aside. Jodi Habush Sinykin, counsel for Midwest Environmental Advocates, pushed for the legislation.

“The Great Lakes community encompasses vital economies, over 40 million people, unique ecosystems and it is a public trust,” says says.

Waukesha lies just outside the Great Lakes basin. But it can ask for Lake Michigan water under one of the compact’s fewexceptions. The city has to prove it can’t find a reasonable alternative in its own backyard, among other demands. Wisconsin's Department of Natural Resources is expected to hold hearings on the request this spring.