This blog was originially published on Science 2034. 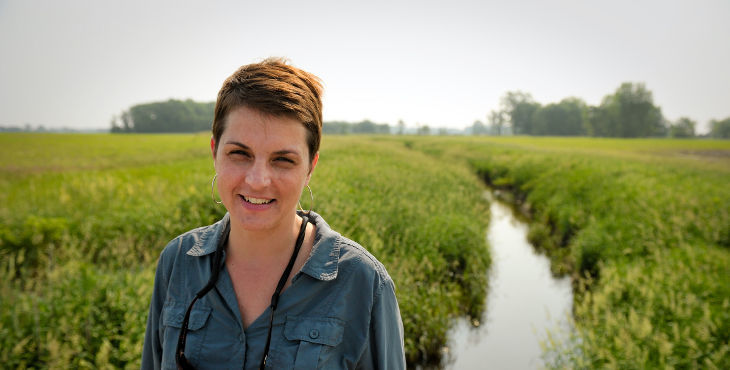 Each year, aquatic invasive species cost the United States economy billions of dollars. It is imperative to quickly identify new invasions and respond accordingly. In 2034, the threat from invasive species will be greater than today due to increasing domestic and international trade. This will be a significant concern since the arrival and establishment of invasive species can compromise ecosystem structure and function.

Detecting the presence of a few individual organisms that make up an invasion front, which are often small and cryptic, can be very difficult, especially in flowing waters like streams and rivers. In 2034, natural resource managers will be able to use field-ready detection techniques, allowing them to track the presence of the first few organisms beginning an invasion in real-time and quickly eradicate them. Rather than relying on visual identification, as we do now, in 2034 we will use a new set of tools and methods to isolate and identify trace amounts of DNA that are constantly shed by aquatic organisms into their environment. We call this “environmental DNA” (eDNA), and real-time detection techniques are on the near horizon.

The detection of eDNA in aquatic systems, especially streams and rivers, is relatively new and questions remain about the simultaneous transport and environmental degradation of eDNA in flowing waters. Currently, a positive “hit” in a water sample, suggesting the presence of eDNA in a river, could indicate the incidence of a target invasive species nearby; alternatively, flowing water could have carried this eDNA from a considerable distance upstream. Thus, water sampling for invasive eDNA in flowing waters is not very reliable at this time.

In 2034, however, we will be able to model and predict how eDNA moves through flowing waters. The research currently taking place at the Notre Dame Linked Experimental Ecosystem Facility (ND-LEEF) is paving the way for this to happen. ND-LEEF includes a set of man-made replicated watersheds (streams flowing into ponds and then to wetlands) that mimic freshwaters in nature and allows scientists to manipulate variables so as to experimentally quantify the transport of eDNA in a way that cannot be done in natural systems. In 2034, through this research, we will know how factors, such as changing water velocity, temperature, uv-radiation, turbidity, and stream bottom substrate, which can all be modified at ND-LEEF, influence the transport and degradation of eDNA.

The use of eDNA as an ecological surveillance tool holds great promise for invasive species prevention and will greatly benefit our nation’s freshwater resources. However, continued financial support from federal agencies, such as the National Science Foundation, National Oceanic and Atmospheric Agency, and the Environmental Protection Agency, are imperative to refine methods for detecting eDNA and improve understanding of how eDNA is stored, transported, and degraded in the environment in order to safeguard our freshwaters from future invasions.

Jennifer Tank is the Ludmilla F., Stephen J., and Robert T. Galla Professor of Biological Sciences at the University of Notre Dame. She is also the Director of the Notre Dame Linked Experimental Ecosystem Facility (ND-LEEF and Interim Director at the Notre Dame Environmental Change Initiative. Dr. Tank’s federally-funded research has included grants from the National Science Foundation and the U.S. Department of Agriculture.