SOUTH BEND, Ind. – The use of environmental DNA (eDNA) by scientists from the University of Notre Dame and The Nature Conservancy to detect invasive Asian carp in the Chicago-area waterway has been validated in Conservation Letters, a new flagship peer-reviewed journal published by the Society for Conservation Biology.

“When you are dealing with cutting-edge research like eDNA, a very important part of the process is getting your science peer-reviewed and published in a well-respected journal,” said Professor David Lodge, director of the University of Notre Dame’s Environmental Change Initiative. “Given all the attention that the Asian carp issue has received, our team is thrilled to reach this new and important stage in the process.”

Last year, working with The Nature Conservancy under a cooperative agreement funded by the U.S. Army Corps of Engineers, the team of researchers used the eDNA technique to discover just how close highly invasive bighead and silver carp were getting to Lake Michigan.

“Critics have questioned whether our research can be trusted, but now that our work has been thoroughly reviewed and published in a scientific journal, hopefully the debate can shift from questioning the science to focusing on policy and management solutions,” said Lindsay Chadderton, The Nature Conservancy’s Director for Aquatic Invasive Species, and a co-author of the paper.

In particular, the scientists were trying to discover if the two species of Asian carp (bighead and silver) had made it past a pair of underwater electronic barriers designed to keep exotic invasive species from moving between the Great Lakes and Mississippi River watersheds. The team of researchers, which included scientists from The Nature Conservancy and Notre Dame, soon discovered genetic material from Asian carp in several sections of the Chicago-area waterway system. Many of the detection points suggested that Asian carp were much closer to Lake Michigan than authorities had previously believed. Some carp eDNA was found in Calumet Harbor, a near-shore area of Lake Michigan itself, many miles beyond the electronic underwater barrier.

The announcement led to significant media attention and numerous public policy responses, including a multi-agency government effort in December of 2009 to apply rotenone, a common pesticide used to eradicate fish populations, to some sections of the Chicago-area waterway. In June 2010, when a live bighead carp was found in Chicago’s Lake Calumet, concerns about Asian carp grew higher. Some observers and industry interest groups questioned the validity of eDNA and noted that the research had not been published by a peer-reviewed journal. The criticisms came despite the fact that the research had been examined thoroughly by a special U.S. Environmental Protection Agency peer-review published in February 2010. 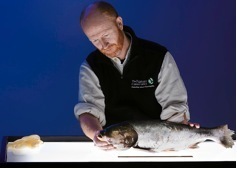 “Getting our research published not only helps rebut those criticisms, but it also provides evidence that eDNA is more sensitive than traditional methods,” said Christopher Jerde, the paper’s lead author. “This is a big new breakthrough in species monitoring and control.”

The paper, titled “‘Sight-unseen’ Detection of Rare Aquatic Species Using Environmental DNA,” describes in full for the first time the depth and breadth of the eDNA process used by the Notre Dame and Nature Conservancy team.

It shows precisely how the eDNA technique compares to other standard methods that agencies and researchers use to hunt for exotic species in the field. From summer 2009 through May 2010, scientists from Notre Dame and The Nature Conservancy collected and analyzed more than 1,000 two-liter samples of water from the Chicago Sanitary and Ship Canal, and other water bodies in the area. Then, using a combination of high-tech genetic tools, they sifted those samples to find traces of eDNA from all sorts of species, including Asian carp.

“We found that the invasion front for bighead and silver carp is much closer to the Great Lakes than people thought, and we found Asian carp DNA where traditional monitoring methods failed,” said Andrew Mahon, the lead geneticist and a co-author of the paper. “We think environmental DNA is an exciting new tool that could revolutionize how we do science in aquatic ecosystems. We have moved beyond the stage of ‘experimental.’ This should now be a standard tool in the toolbox for exotic species research.”

This research grew out of a formal partnership between the University of Notre Dame and The Nature Conservancy, one of the world’s largest and most established conservation organizations. The partnership is designed to develop science-based solutions to environmental problems.

Conservation Letters is a scientific journal that publishes research with immediate implications for the conservation of biological diversity worldwide. It is published by the Society for Conservation Biology.

The mission of Notre Dame’s Environmental Change Initiative is to conduct innovative research that helps to solve complex environmental problems regarding invasive species, land use and climate change, focusing on their impacts on water resources.

The Nature Conservancy is a leading conservation organization working to protect the most ecologically important lands and waters around the world for nature and people. To date, the Conservancy and its 1 million members have been responsible for the protection of more than 120 million acres worldwide. For more information or to watch a video, visit http://nature.org/carpscience.