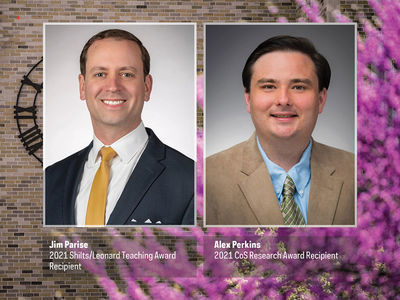 The College of Science at the University of Notre Dame is proud to bestow the 2021 Father James L. Shilts, C.S.C./Doris and Gene Leonard Teaching Award upon James Parise, Ph.D., and the 2021 College Research Award upon T. Alex Perkins, Ph.D.

In his ten years at Notre Dame, Professor Parise has regularly taught the introductory organic chemistry course, viewed as one of the most challenging classes students take. In fact, his students report an extremely high intellectual challenge of six to seven hours per week of studying outside of class, yet his course evaluations are consistently in the top quartile across all categories. Professor Parise also regularly teaches the second semester organic chemistry course taken by science majors. This is also a large service assignment with multiple sections of nearly 150 students. Again, his teaching has been outstanding. One student’s comments are representative of many:

“Organic chemistry has been one of the most challenging yet enjoyable

hard work inside and outside of class.”

Beyond the courses he teaches, Professor Parise is interested in developing more effective teaching methods for large lecture classes and in improving organic chemistry pedagogy. He was a pioneer in introducing technology and digital learning into the chemistry curriculum. To facilitate student participation in large classes, he implemented the use of iPads. He creates original Lightboard videos that summarize and provide examples of concepts in organic chemistry that would be difficult to work through in a single class.

Parise is also the coauthor with Marc Loudon of a textbook in organic chemistry, Organic Chemistry—6th Edition, which has been adopted in many of the top undergraduate chemistry programs across the country. Parise’s excellence in teaching has been recognized with the Thomas P. Madden Award in 2015 and the Rev. Edmund P. Joyce, C.S.C. Award for Excellence in Undergraduate Teaching in 2019.

The Father James L. Shilts, C.S.C./Doris and Gene Leonard Teaching Award, bestowed annually on a faculty member in the College of Science, is named in honor of Father James Shilts, C.S.C., who taught in the Department of Physics from 1961 until his death in 1982, and was endowed in 1984 by Dr. Eugene T. Leonard III in memory of his parents Dr. Eugene and Doris Leonard. Dr. Leonard III was a member of the Science Advisory Council from 1976 until 1991.  The award recognizes a faculty member who has demonstrated sustained excellence in teaching.

T. Alex Perkins, associate professor of biological sciences, is a leader in infectious disease modeling. He joined the Department of Biological Sciences in fall 2014 as the Eck Family Assistant Professor and was promoted to associate professor with tenure in 2020. His program focuses on mathematical, computational, and statistical approaches to address questions on the epidemiology of mosquito-borne infectious diseases such as Zika, dengue, malaria and other insect-borne diseases. He uses mathematical modeling to assess patterns of disease transmission and guide implementation of vector control. The goal of his research is to obtain a predictive understanding of where and when these diseases occur, what impact interventions will have, and how the distribution and responses to intervention will change as the underlying drivers shift with time. His novel modeling techniques have gained widespread attention for their predictions of the spread of the Zika virus and yellow fever. He has worked extensively with the WHO and the CDC and on spatial area repellents with other Notre Dame researchers trying to prevent the spread of malaria. His 65 publications, including 27 in the past two years, span a broad range of topics in modeling and epidemiology. Since joining the Notre Dame faculty, he has received 23 awards from 16 different funding agencies spanning federal agencies, non-governmental organizations, industry, and foundations. Perkins was elected as an Early Career Fellow of the Ecological Society of America in 2017 and received the DARPA Director’s Fellowship in 2018, which is awarded to the top ten percent of DARPA Young Faculty Award recipients. He received a DARPA Young Faculty Award in 2016 and was honored with the Ralph E. Powe Junior Faculty Enhancement Award in 2015. He has also developed a rich and interactive team-focused laboratory environment that has trained some outstanding young scientists.

The College of Science Research Award, established in 2018, recognizes an outstanding investigator who has made substantial recent contributions to her or his field. This award highlights a highly-productive faculty member with a steep upward trajectory in research and widening national and international impact.

Originally published by Tammi Freehling at science.nd.edu on April 15, 2021.