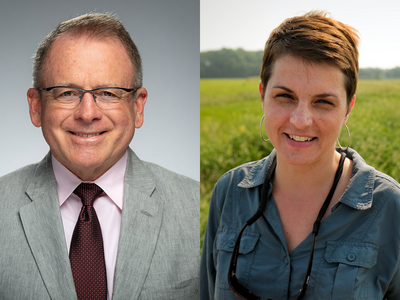 The Society for Freshwater Science (SFS) has recognized two University of Notre Dame faculty members, Gary Lamberti and Jennifer Tank, from the Department of Biological Sciences, with 2022 SFS Career Awards.

Presented annually, the SFS Career Awards recognize outstanding contributions in advancing freshwater science through research, translating this science into policy or social action, and service to the society.

Gary A. Lamberti, who is the Rev. Julius A. Nieuwland, C.S.C., Collegiate Professor of Aquatic Science and directs the Stream and Wetland Ecology Laboratory at Notre Dame, received the Society’s Award of Excellence.

The award honors Lamberti’s significant advancement of the scientific understanding in many areas of freshwater science, including the role of species interactions in shaping food web structure and function in streams and wetlands, the ecology and ecosystem effects of Pacific salmon in their native and introduced ranges, and the impacts of land-use change, emerging contaminants, and invasive species on aquatic ecosystems.

Lamberti’s research over the last forty years has advanced the fundamental understanding of a broad array of freshwater ecosystems at multiple scales. Further, he has co-edited Methods in Stream Ecology, which is a landmark contribution to students, teachers, researchers, and practitioners of stream ecology around the globe. In total, Lamberti has over 200 publications and has mentored 30 graduate students and countless undergraduates in his laboratory.

“I am honored and humbled to receive this recognition from this global society and its members, and give full credit to Notre Dame and my wonderful students, colleagues, and family who have supported and nurtured my career over the years,” said Lamberti.

Jennifer Tank, Ludmilla F., Stephen J., and Robert T. Galla Professor of Biological Sciences and Director of the Notre Dame Environmental Change Initiative, received the Environmental Stewardship Award in recognition of her work to translate scientific knowledge into the public.

Tank’s contributions have advanced understanding of the ecology and biogeochemistry of agriculturally impacted streams, ultimately influencing and guiding stream management and conservation.

In addition to being a leader in the biogeochemical scientific community, she has actively partnered with the agricultural and conservation sectors, most notably via her recent project, the Indiana Watershed Initiative, which is focused on Indiana’s “working lands” to monitor the impacts of the planting of winter cover crops and restoration of floodplains with two-stage ditches on water quality in the agricultural Midwest.

With her multi-stakeholder, collaborative approach as a frame for pursuing science that matters, Tank is at the forefront of translational ecology. Her work aims to find win-win solutions that reduce nutrient runoff while maintaining productive and profitable agriculture that can feed the world.

Lamberti and Tank have contributed significantly to the SFS via science leadership, service, and contributions to foundational and applied freshwater science. Notably, Lamberti served as SFS President in 1997 and Tank served as President in 2019. Both are also SFS Fellows.

”It’s been a thrill to contribute to Notre Dame’s long standing strength in freshwater ecology, which supported my involvement in the SFS, as it has grown into a thriving, international society,” said Tank. “To be nominated by my former graduate students makes this award even more meaningful.”

The 2022 Career Award winners will be formally recognized during the SFS’s annual meeting in an awards ceremony scheduled for Wednesday, May 18, 2022 in Grand Rapids, Michigan.