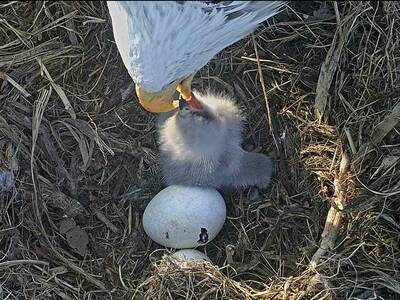 The Notre Dame Linked Experimental Ecosystem Facility (ND-LEEF) has installed a new live bald eagle camera at St. Patrick’s County Park in South Bend, where a pair of bald eagles has nested in the same sycamore tree since 2015.

The new in-nest camera is a full HD camera. It can pan 360 degrees, tilt from vertical to horizontal and zoom up to 32x. The camera allows for live weather information to be displayed on the livestream, and enhanced low-light capability means viewers can witness more activities overnight. Additionally, during installation, in-nest measurements were recorded that allowed the camera operators to develop an accurate scale bar so viewers and researchers can now accurately estimate the size of the eagles and their prey.

The camera allows viewers to watch as the nest is built, the eggs are laid and the eaglets hatch and reach the fledgling stage. This process begins late in the year and continues into the following spring and summer. Egg-laying typically occurs in late February. Hatchlings arrive about five weeks later.

Financed with donations from Notre Dame Day 2021, the new camera replaces an older one, installed in 2017, that stopped working. Davey Resource Group donated the labor for installation, which involved ascending the tree using ropes and mounting the camera above the nest. This was timed to coincide with the period between nesting seasons when the nest is empty.

“We are excited about the new camera’s ability to embed real-time information in the livestream. For now we have included live temperature and an accurate scale bar but are planning other ways to enhance the livestream with relevant information for eagle viewers,” said Brett Peters, assistant director of ND-LEEF.

Among other things, the new camera will capture daily photos of the eagles’ diet, which consists of a variety of fish, mammal, bird and reptile species. Such photos formed the basis of recent research by former Notre Dame undergraduate student Firas Houssein and current graduate student Katherine O’Reilly, as well as Michael Brueseke, laboratory specialist with the Center for Environmental Science and Technology; Gary Lamberti, professor of biological sciences; and Peters with ND-LEEF.

As published in the American Midland Naturalist, the team examined more than 26,000 images during the 2018 brood-rearing period, identifying 135 prey items and at least 26 prey “taxa” over 75 days. The majority of recorded prey items were fish (73 percent), with redhorse suckers being the most common. Smaller numbers of birds (13 percent), mammals (10 percent) and reptiles (4 percent) were also observed.

Bald eagles were reintroduced to Indiana in 1985. The pair at St. Patrick’s County Park arrived in 2015. They occupy a former red-tailed hawk nest atop a sycamore tree on the south side of the park. Along with another pair at Potato Creek State Park, the St. Patrick’s duo was the first to successfully nest in the county after reintroduction.

Originally published by Erin Blasko at news.nd.edu on November 08, 2021.