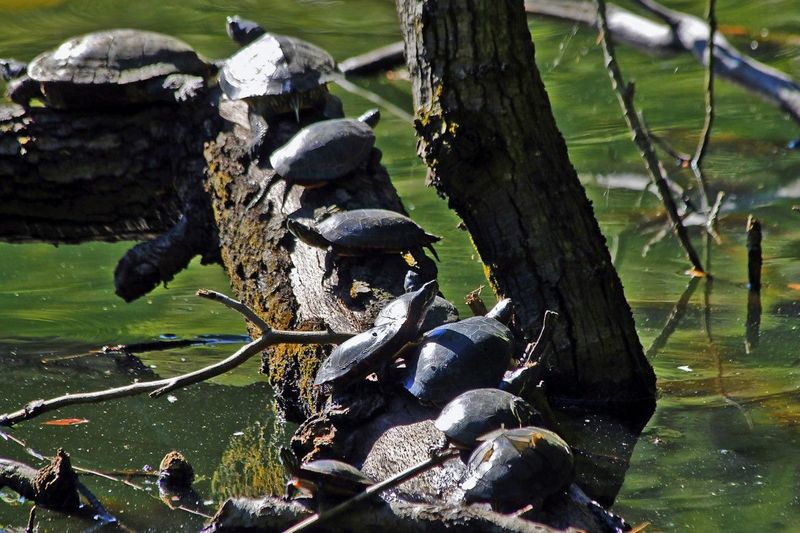 You likely won’t find any painted and snapping turtles headbanging to Metallica in Lake Michigan wetlands.

But heavy metal runs in their veins.

These turtles accumulate heavy metals in their tissues, according to a recent study completed at University of Notre Dame and published in Environmental Monitoring and Assessment. Some of those metals come from local industries.

“There’s reason to believe the levels of metals like cadmium, chromium, copper and lead are impacted by anthropogenic sources,” said Matt Cooper, a research scientist at Northland College’s Burke Center for Freshwater Innovation in Ashland, Wisconsin and co-author of the study.  “They are much higher than would occur naturally, and the geology in the areas they were studying wasn’t known to have high levels of those contaminants.”

Bearing the burdens of these metals could shorten turtle life spans and make them less fertile, although those impacts on painted and snapping turtles have not yet been measured.

“Right now, we can only really make guesses,” said Dayna Smith, who conducted the study as a student at University of Notre Dame.

In fact, freshwater turtles have been a bit neglected by research. Arriving at meaningful conclusions about how they accumulate metal was difficult because the researchers had few studies to build on.

“We had to search far and wide to even find data,” Cooper said.

They ended up comparing their results to studies of freshwater turtles in Kentucky and Iran, which enabled them to arrive at the conclusion that “Lake Michigan wetland turtles have moderate levels of heavy metal body burdens and some metals, such as copper, appear to be relatively high in these animals.”

Part of the reason is that until now, turtles have been difficult to sample. It wasn’t clear if tissue could be obtained without collecting whole turtles and killing them.

This study measured metals in shell and claw samples and found that they corresponded with levels in liver and muscle tissues. Metal contamination could be monitored by just clipping shells and toenails in the field – and without killing the turtles.

More research is needed before an ongoing metal monitoring program for freshwater turtles can be instilled, Cooper said.

“This paper is a good first step,” Cooper said. “There’s a lot more work that can be done.”

Expanding the research is important, Smith said. Fish, plants, and bugs are studied, but the little-studied turtles could supplement that research.

“They do represent an important part of the food web,” Smith said.

Another cause for more research on freshwater turtles, particularly regarding the way they accumulate heavy metals, is that many people eat snapping turtles.

This study proved that turtles carry heavy metals in their tissue, but there are yet many unknowns about how that might harm people. We don’t know, for instance, if turtles carry dangerous contaminants like mercury, Cooper said. We also don’t know the degree to which they are consumed by humans in the Great Lakes region.

“There’s a lot of room for growth in turtle research,” Smith said. “I hope that they are studied more.”