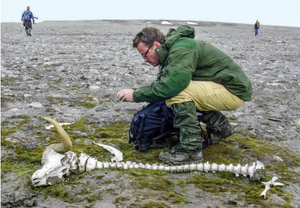 If time travel were possible, big game hunters would be clamoring to visit the Yukon during the last ice age. About 30,000 years ago, mammoths with 3-meter tusks and shaggy coats nosed about with bison, woolly rhinos, muskoxen, and small horses, while lions, short-faced bears, and scimitartoothed cats lurked in the background. But the vast Pleistocene game park had vanished by 10,000 years ago. The great beasts were long gone, replaced by familiar elk and moose, with lynx and grizzlies as predators.

For decades, scientists have debated why these megafauna disappeared from the Arctic and much of the rest of the world. Did a fluctuating climate drive species to extinction? Or did humans, in their relentless expansion across the globe, kill off the big game in an ancient hunting spree?

Now, ancient DNA data have entered the fray, most recently in the form of molecules scooped directly from samples of soil or ice. By sequencing whatever DNA emerges from even a thimbleful of ancient soil, researchers are reconstructing ancient ecosystems as far back as 700,000 years ago with astonishing clarity. A single sample of so-called environmental DNA (eDNA), combining sequences from plant and animal detritus as well as microbes, can provide an inventory of ancient species, filling gaps in conventional fossil and pollen records. The method “could revolutionize our understanding of [ancient] ecosystems by giving us … a full picture of the food web from the ground up,” says geologist Fred Longstaffe of Western University in London, Canada.

In a landmark paper published in Nature last year, for example, researchers using eDNA discovered that in the Arctic, the big herbivores’ favorite foods—tasty herbaceous plants like marsh marigolds and alpine forget-me-nots—grew ever scarcer as Earth warmed after the last glacial age. That points to climate as a factor in the extinctions. A paper using ancient DNA and detailed climate records, published online this week in Science (http://scim.ag/Cooperetal), goes further, suggesting that bouts of rapid warming disrupted ecosystems and slammed the megafauna even before the last great warming. The finding “is going to overturn the human versus climate debates,” says lead author Alan Cooper of the University of Adelaide in Australia, “and serves as a grim warning about climate warming.”

When it comes to eDNA, researchers are still working out how to date samples and avoid contamination, and the research is most developed for Arctic environments. But the data also illuminate how the post-glacial thaw transformed other landscapes, such as temperate forests, with implications for today’s warming world.

“Every time molecular data comes into a field, it shakes the field up,” says paleoecologist Jason McLachlan of the University of Notre Dame in Indiana. “Now it’s happening in paleoecology. … There isn’t any paleoecologist in the world who hasn’t thought about using ancient DNA.”

IN THE 1980s, microbiologists using new techniques for extracting and analyzing DNA found they could get a snapshot of existing species in a sample of soil or seawater by simply collecting and sequencing its DNA en masse, without bothering to try to isolate and culture the microbes themselves. Then evolutionary geneticists successfully applied the method to the past. For example, Eske Willerslev of the University of Copenhagen took eDNA from 2000- and 4000-year-old cores from the polar ice caps. His team melted ice from cores, filtered out DNA, and used DNA tags called primers to pull out all the copies of part of a gene known to vary among species. They were able to identify 57 groups of plants, fungi, and animals.

After that proof of principle, permafrost seemed the next logical target, as this permanently frozen soil has proved to be a great preservative of DNA in bones. At the time, others “told me it was a most stupid idea,” Willerslev recalls. But in a sugar cube–sized permafrost sample from northeastern Siberia, he found DNA from “all kinds of plants, bison, horses, bears, mammoths, even lemmings.” Hendrik Poinar, now an evolutionary geneticist at McMaster University in Hamilton, Canada, extended the method to a cave in the Arizona desert in 2003. There, a quarter-century of digging and the removal of 2 tons of dirt had unearthed fossils of two dozen species, from giant sloths to condors, dating back 40,000 years. Poinar sequenced eDNA from less than a thimbleful of soil and managed to identify 12 species—half of the excavation total.

Environmental DNA comes from urine, feces, hair, skin, eggshells, feathers, and even the saliva of animals, as well as from the decaying leaves and fine rootlets of plants. Most of this DNA degrades in hours or weeks, destroyed by bacterial or fungal enzymes. But bacteria sometimes take up the molecules, preserving fragments intact inside their cells, Willerslev says. Much more DNA binds to clay, humic acid, or other charged particles that shield it from enzymatic attack.

Traditional species surveys of modern water and soil suggest that eDNA can give a good picture of biodiversity. In rivers, for example, “you can find all the life in the rivers just in a single sample,” says Pierre Taberlet, an ecologist at the CNRS Alpine Ecology Laboratory in Grenoble, France. And because fossils are rare, eDNA may bring surprises: Poinar found DNA from a woolly rhinoceros—a species never before found in the New World—in ancient Yukon permafrost.

By allowing investigators to survey entire ecosystems, eDNA is revealing how glacial climate shifts affected both plants and animals. In last year’s Nature study, Willerslev, Taberlet, Cooper, and others collected 200 samples of soil from around the Arctic. They divided the samples into three periods: From about 50,000 to 25,000 years ago, when climate fluctuated sharply; from 25,000 years ago to 15,000 years ago, a consistently cold period when glaciers were at their peak; and from 15,000 years ago to today, when Earth emerged from the last ice age.

The researchers extracted DNA from the soil samples and then used specially designed probes to pull out and sequence DNA from particular species of plants, mammals, and also nematodes, which can serve as indicators of soil moisture and vegetation. Finally, they sequenced DNA from fossilized guts and stools of ancient mammals.

They found that before and during the peak glacial period, herbaceous plants called forbs, such as anemones and forgetme-nots, dominated a dry and dusty Arctic landscape (Science, 28 February 2014, p. 961). Large mammal herbivores such as mammoths were also common then, and the gut and stool contents showed that the forbs were a mainstay of these animals’ diets. As glaciers melted and the climate grew warmer and wetter, however, forbs became rare. Less-nutritious grass and shrubby plants took hold. That’s when eDNA and other indicators show that the big grazers declined as well, Willerslev says. Thus, he says, “it’s tempting to say it’s the loss of the main food source that led to the extinction of these animals.”

Cooper’s new study, which offers far better time resolution, suggests that even before the end of the ice age, brief bouts of warming caused repeated local extinctions of the megafauna. The study uses a variety of climate records to create an astonishingly fine-grained picture of temperature fluctuations on timescales of as little as a decade over the past 50,000 years. The researchers tracked extinctions across Eurasia and Alaska using the bones of large mammals such as mammoths and bears.

They found that species went locally extinct whenever the weather warmed— whether humans were present or not.

For example, in North America the giant short-faced bear was already gone before humans arrived about 13,000 years ago. In Eurasia, many big animals persisted after modern humans showed up 44,000 years ago, surviving for thousands of years longer and then disappearing during repeated sudden warming events. Animals first hit by warming might have been particularly vulnerable to hunting, Cooper says, but “climate is doing much of the damage before humans arrived.”

Researchers who think humans drove these extinctions welcome the new data from eDNA and other studies. But they still think climate is secondary. “Having this layer of information tuned to this chronology and showing warming is important and a great start,” says paleoecologist David Burney, retired director of conservation at the National Tropical Botanical Garden in Kalaheo, Hawaii. “But it by no means lets humans off the hook.” He thinks humans repeatedly made recovery impossible for struggling species, either by hunting them or by interrupting migrations and feeding.

ENVIRONMENTAL DNA STUDIES have flourished in the Arctic, where cold, dry conditions help preserve DNA. But an even richer source of eDNA may come from lakebeds in temperate latitudes, long a source of information about ancient ecosystems. Because lake sediments are deposited in annual layers, they can be precisely dated, and they preserve microscopic fossils and pollen. But pollen may not reveal the species or even genus of plants, and its records are stacked in favor of those plants that produce masses of windborne pollen. With eDNA, “we can reconstruct the ecosystem to a way greater resolution,” Poinar says.

To explore the method’s potential, McLachlan, Poinar, and Candice Lumibao, now a postdoc at the University of Minnesota, Twin Cities, sampled three Michigan lakes. Pollen data had suggested that beech trees colonized the landscape only about 1500 years ago, 7000 years after ice age glaciers receded. But the eDNA points to small pockets of beech trees in Michigan as early as 5000 years ago. “They may have moved north earlier than we thought they did,” McLachlan says.

That finding is echoed in another eDNA lake sediment study by Willerslev’s team. Many researchers had thought that spruce and other trees disappeared from Scandinavia during glacial times, and then expanded back once the climate warmed. But an eDNA study in Norway and Sweden showed that one lineage of spruce persisted in small pockets even when most of the country was covered with ice (Science, 2 March 2012, p. 1083). Thus, this species had a leg up on revegetating the landscape once the ice was gone.

Both studies show that eDNA tracks early appearances of species better than pollen. They “suggest that trees were poised to repopulate glaciated areas much earlier than researchers had once thought,” McLachlan says, a result that could have implications for understanding how fast today’s trees will be able to adjust to global warming. This level of detail “is going to be a game changer for global change biology,” he adds.

Willerslev’s Arctic data, too, send a message for today’s warming era: Before the last glacial maximum, the Arctic ecosystem seemed to bounce back from climate fluctuations. But after that glacial peak, the forbs and the ecosystem as a whole never returned to their former state, likely because too many species completely disappeared. That’s a warning, Willerslev says. Even if warming was halted today, there is no guarantee that “we will return to the same vegetation cover.” The eDNA in just a teaspoon of soil may be enough to tell future generations whether his prediction was correct.

Originally published by Elizabeth Pennisi at www.sciencemag.org on July 24, 2015.