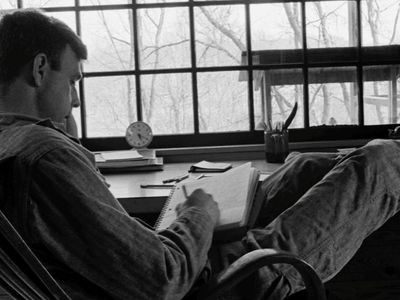 “The care of the Earth is our most ancient and most worthy, and after all our most pleasing responsibility. To cherish what remains of it and to foster its renewal is our only hope.” Known for words such as these and for his deeply rooted, agrarian values, Wendell Berry is called “a prophet for rural America.”  On Tuesday Feb. 13 from 7:45-9:15pm Look and See: A Portrait of Wendell Berry will be screened in the DeBartolo 101. An 80-minute long documentary filmed in Henry County, KY, Look and See depicts the life of this agricultural hero by following several residents of Henry County through four seasons.

The film characterizes both the activist and the land by telling the story of Berry’s community as seen through his eyes. Following the difficult and influential choices of community members and weaving together interviews with local residents, farming imagery and Berry’s own words, the film tells the tale of conflicted rural America as Berry saw it unfold through the forty-paned window above his long wooden writing desk and in the fields he farmed for decades. “This film has an understated beauty and hand-crafted elegance that mirrors what you find in Wendell Berry’s poems, essays and fiction. But like Berry, it also has a sharp, prophetic edge,” Says Tom Springer, Managing Director of the Notre Dame Environmental Change Initiative.

Berry’s writing articulates themes of living in communion with the land, seeking health and peace and resisting the grips of modern American culture. In 1965 Berry returned to his birthplace in Henry County after living and teaching across the U.S. and Europe. There he and his wife raised their two children and worked the land.  Committed to farming, writing and teaching, they developed a reciprocal relationship with the earth and their community in rural agrarian Kentucky. The core values of simplicity, stewardship, sustainable farming and local economies became integral components of Berry’s teaching, activism and writings. “We hear Berry in the 1970s, arguing in his firm, well-reasoned way against the perils of industrial agriculture, at a time when few people knew or cared what ‘organic’ meant. We hear Berry warn of the rootlessness of American life, and what happens when people identify more as consumers than as citizens with personal and civic obligations to their community,” Springer says. Now those core agrarian values are under attack by industrial, capital-based agriculture with its machines, chemicals and debt.

So, while it tells the story of decades past, the film’s themes are still urgently relevant. Springer emphasizes, “Much of what Berry writes about has come to pass, yet the film isn’t just history. For instance, his ideas about how our economy must serve people and the environment remain seminal to the local food and sustainability movements. And he’s lived this life — not just written about it. He grounds his writing in the ancestral land he farms, and the lifelong kinships he’s formed with the people of his rural Kentucky community. That’s a story Look and See tells remarkably well."

Making artful use of Berry’s own poetry, incorporating thoughts from his family and featuring original wood engravings by Wesley W. Bates, whose art also accompanies many of Berry’s publications, Look and See, gives voice to a region, brings attention to individuals often overlooked, recognizes a man’s contributions and evokes essential questions about where humanity is headed. Created and directed by Laura Dunn and produced by Robert Redford, Terrence Malick and Nick Offerman, the film has been updated slightly since its award-winning premier at the March 2016 SCSW Film Festival.

The screening is sponsored by the Center for Ethics and Culture, Environmental Change Initiative, Major in Neuroscience and Behavior, Minor in Sustainability, and GreeND. Refreshments and discussion will follow.

Originally published by Natalie Ambrosio ’17 at sustainabilitystudies.nd.edu on January 24, 2018.