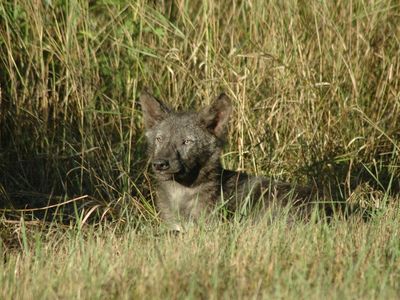 Gary Belovsky, director of the University of Notre Dame Environmental Research Center (UNDERC), and David Flagel, assistant director at UNDERC-West in Montana, conducted several studies on the cascade effects that grey wolves at UNDERC-East, located within Wisconsin and Michigan, would have on the area’s ecosystem. The researchers looked at how both coyotes and whitetail deer reacted to the wolves’ presence, as well as how their food sources – small animals and plants – might benefit. Whether it’s because of folklore or wolf attack stories from Asia or Europe, wolves get a bad rap. However, the grey wolves found in Canada and the United States are relatively harmless to humans and may even be considered beneficial to other animals in some ecosystems. New Notre Dame research has shown that wolves living in Michigan’s Upper Peninsula are actually helping foxes, hares, and plants survive. This is because some larger predators and herbivores live in fear of being killed – but not necessarily because they are being killed – and change their behavior as a result. “What we are seeing is the concept of ‘the enemy of my enemy is my friend,’” said Flagel. “The coyotes mostly hunt small animals like foxes, rabbits, hares, and some deer. The wolves that live within UNDERC-East are territorial and attack the coyotes to keep them away from deer, the wolves’ main food, thus helping the small animals that coyotes kill to survive. Additionally, the deer that are now being hunted by wolves are living under a heightened sense of fear and are therefore spending more time scanning for wolves and less time eating, helping tree saplings and wildflowers grow faster.” The research results showed effects on sapling growth that were twice as impactful as a similar study done at Yellowstone National Park in 2001. In discussing why this is the case, Belovsky said, “There could be many reasons why our study presented a much larger impact, one of which was most likely the more precise measurements in an experiment. But another could be that our research was done in a more forested area where deer must constantly be on the lookout for an attack, as they graze for food as individuals. This means the fear that deer feel is likely greater in a forested area than an open plain where deer graze in a group and are more likely to see a predator coming.”

The next step in this research is to study how and when deer become aware they are in a wolf territory. This will encompass manipulating a variety of indicators that are believed to influence deer when they are near the wolf pack.

Originally published by Brandi Klingerman at research.nd.edu on February 13, 2017.