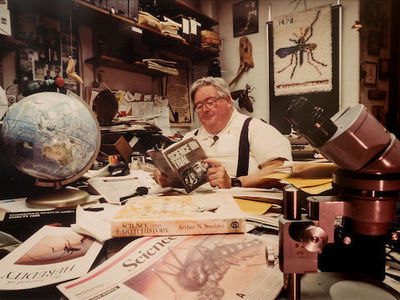 During his lunch hour, George Craig, Notre Dame’s Clark Professor of Biology, wasn’t about to dine all alone in his office, wasting time. If he was going to eat, so were his research subjects.

Surrounded by books, journals and newspapers, Craig, a bear of a man with a round, expressive face framed with dark-rimmed glasses, ate with his forearms resting on stout, cylindrical, paper boxes topped with mesh. Inside, mosquitoes fed on his arms while he ate his own lunch.

“That was pretty amazing to see, walking into his office and there he was, feeding all the mosquitoes,” says Ronald Hellenthal, biology professor emeritus. “That’s a testament to his dedication. I don’t know how many people would have done that.”

Even though his mother wanted him to become a doctor, Craig had fallen in love with entomology while working on his master’s degree at the University of Illinois, guided by a prominent entomologist there, William Horsfall, who fostered Craig’s interest in mosquitoes. After earning his doctorate from Illinois in 1956, Craig was recruited to Notre Dame the following year by Rev. Theodore Hesburgh, CSC, who was seeking to position the University as a powerhouse in the sciences.

Originally published by Deanna McCool at research.nd.edu on January 06, 2021.