Fish probably get the most attention when it comes to gauging the effects that heavy metals have on Lake Michigan’s inhabitants. But overlooked in this realm of research are turtles.

Being that they are a part of the ecosystem too, there is still plenty that scientists can learn by studying turtles in Lake Michigan and its surrounding areas. Take a recent study led by researchers at University of Notre Dame that considered painted turtles and snapping turtles from a number of the lake’s wetlands.

The scientists gathered turtles from wetlands around the mouths of the Grand, Muskegon and Kalamazoo Rivers. Additional wetland sites considered sat around Mona Lake in Muskegon County, Michigan. The wetland sites were chosen based on the types of land use surrounding them, such as industrial or urban. 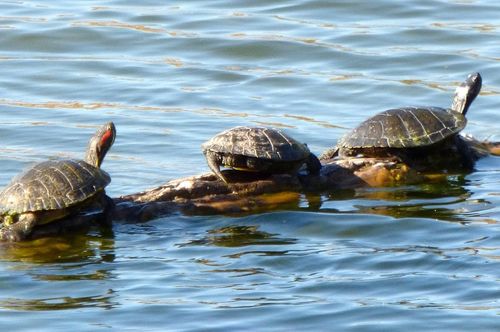 At these wetlands, researchers used turtle shell and claw fragments. Shells and claws were commonly clipped so that most of the turtles wouldn’t be harmed. A few were sampled for tissues, however.

Researchers found that the metals they measured in claws and shells matched up with levels that they saw in tissues. That confirms their method is just as reliable as turtle tissue analysis, without the injury risk.

From there, scientists compared their findings to the relatively few available studies they could uncover on freshwater turtles, with some relating to turtles in Iran and Kentucky. Their results indicated that the metal levels found in the Lake Michigan turtles were somewhere in the medium range.

Scientists hope the findings will spur more research into the roles that freshwater turtles play. Their full results are published in the journal Environmental Monitoring and Assessment.