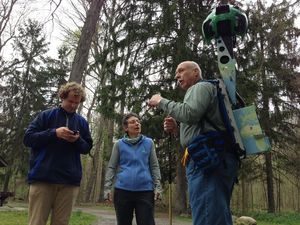 SOUTH BEND — It looks like a Martian robot with a big green eye. City Parks Director Aaron Perri heaved it — all 48 pounds — onto his back and started walking the riverside trails.

Strangers stared, waved at it or yelled, “What is it?”

“Hey, this is for Google,” he'd reply. “There weren’t many questions after that.”

No, because he surmised that a lot of people are familiar with Google’s Street View. The so-called Google Trekker, with 15 individual cameras pointed from a green sphere above Perri’s head, was continuously shooting photos. These will be stitched together for a panoramic photo that visitors to google.com/maps will click through to virtually walk every step of a trail.

It's just like the Street View that Google now shows of streets and houses, only this will show several of our local parks, plus a float down the St. Joseph River.

The Trekker is touring 18 city and county parks across Indiana, thanks to an agreement between Google and the Indiana Parks and Recreation Association, said the group’s director, Lisa Nye.

South Bend finished taking its turn with the single unit early this week, then passed it on to St. Joseph County Parks.

“We’re thrilled that we got it so early in the season,” said County Parks Director Evie Kirkwood.

Blossoms on trees and spring wildflowers are at their stunning peak, good for perhaps another week or two. Leaves are just starting to appear on trees, though not so much that it obscures long-distance views through the woods. It’s relatively cool for the hikers. And there are no mosquitoes.

Kirkwood said she and fellow staff are trying to cover the key trails at each park, then do extra if time allows before passing the Trekker on to Goshen’s parks department early next week. They finished St. Patrick’s County Park on Wednesday and now are working on Spicer Lake, Bendix Woods and Ferrettie-Baugo Creek.

Google officials told Nye that it typically takes six to 12 months before the trail views go online — time needed for Google to stitch the many images together and to blur each face and license plate seen along the way, to protect identities.

When the images go online, she said, she plans to do a big public relations launch.

Other parks departments across Indiana that are using the Trekker are the town of Porter, Valparaiso, Logansport, Fort Wayne, Huntington, Huntingburg, Bloomington, Carmel, Clarksville, Danville, Noblesville, Plainfield and Wabash, along with Johnson and Vigo counties.

Since time and availability of the Trekker was limited, Nye said, the list is based on which departments responded first.

She hopes to have the Trekker back in Indiana to tour other county and city parks and trail systems late this year or early in 2017. She also hopes the Indiana State Parks takes it through its properties.

So far, Google’s Street View boasts views of major natural sites around the globe (google.com/maps/streetview), but not much of local and state parks.

Pure Michigan took the Trekker to the state’s tourist hot spots, including the Mackinac Island, Sleeping Bear Dunes, Silver Lake and the state Capitol in Lansing (Michigan.org/googletrekker). But a Pure Michigan official said there are no plans for the tourism effort to get the Trekker back. And it’s unclear whether the Trekker will circulate further among Michigan’s other parks.

That’s why Nye and local parks staffs are so excited to show off their trails, even if it’s a chore to lug the Trekker, which is so top-heavy that hikers need walking sticks for balance.

Aside from the inflatable boat that motored it down the St. Joseph River and a utility cart that trolled it through Elbel Golf Course, it was borne on the back of “sweating, cursing people,” said Matthew Moyers, special project coordinator for South Bend Parks and Recreation.

Out of about nine people who carried it for South Bend, Perri hiked the most, covering just more than eight miles of the city’s riverside trails. More than he expected. If he’d made a straight line along the trail’s route, it would have been perhaps 3.25 miles. But he covered the trail on both sides of the river and backtracked over bridges to show viewers how all of the parts connect.

Not having trained for it, he said, “I was a little sore.”

He took the opportunity to post three selfie videos to Facebook while he was hiking and to boast about the city’s parks.

Staff hiked with it over all of the trails at Rum Village Park. The Trekker went hiking past historic graves along the drive through South Bend’s City Cemetery. It visited Leeper Park’s tennis courts, duck pond, rose garden and island. It toured the dog park along Niles Avenue.

At Potawatomi Park, staff hiked it through the park and around the Kids Kingdom play equipment. For a park overview, they took it to the highest point they could climb: the top of the pool’s water slide. No, it didn’t go for a plunge. Google Trekker doesn’t like getting wet.

But a boat took it from Merrifield Park in Mishawaka to St. Patrick’s Park. Rather than fasten it to a person, Moyers said, staff used a log fixed onto a rigid base.

At Elbel, Moyers said, staff drove it on a utility cart along the perimeter of the expansive Mud Lake wetlands, and they took it along each of the 18 golf holes.

He said the Trekker shot a total of about 24,000 panoramic shots in South Bend, which will all be stitched together.

Perri said the Trekker views will help visitors to check out the city before moving here and locals to scope out trails and golfing. But he said it will also provide archival footage of Elbel, as a comparison to what it may look like five or 10 years from now, since the city is hiring environmental and golf management consultants to assess — with public input — how Elbel should be run differently.

Kirkwood said visitors sometimes say they walk just along the county park roads, not the trails. She hopes the images will help them feel at ease so they can “hike alone in a place they’ve never hiked before.”

Brett Peters, assistant director of the University of Notre Dame’s controlled ecosystem within the park, called ND-LEEF, “a good opportunity to showcase what ND-LEEF is for people who can’t be there.” That, he said, includes fellow researchers outside of the area who’d be interested in Notre Dame’s work.

When the images go online, Peters said he’ll be looking for the bald eagle who was perched in a tree and the other eagle who flew into their nearby nest while he hiked the ND-LEEF pavilion and reservoir. The raptors may be too small for Google viewers to notice, but, he said, “I will see it.”