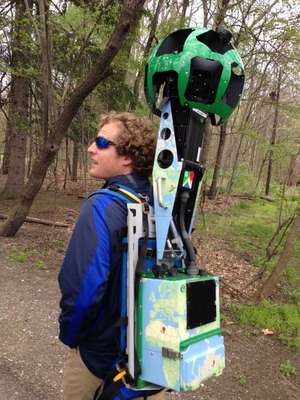 SOUTH BEND, Ind. (AP) — A Google camera system mounted on a backpack that's carried by hikers is collecting panoramic views of city and county parks across Indiana that will allow viewers to experience scenic treks without breaking a sweat.

South Bend Parks Director Aaron Perri was one of nearly 10 people who recently carried Google Trekker along trails in the northern Indiana city for the off-road imaging effort. The device has 15 individual cameras mounted within a green sphere above the carrier's head to collect images that will be stitched together into panoramic photos.

The Trekker is touring 18 city and county parks across Indiana under an agreement between Google and the Indiana Parks and Recreation Association, the group's director, Lisa Nye, told the South Bend Tribune (http://bit.ly/1TbTDSg ).

The 48-pound Trekker is so top-heavy that hikers need walking sticks for balance. Most of the time, it's carried on the back of "sweating, cursing people," said Matthew Moyers, special project coordinator for South Bend Parks and Recreation.

But Nye and local parks staffs say they're excited to show off their trails, even if it's a chore to lug the Trekker to image them.

St. Joseph County Parks Director Evie Kirkwood said visitors sometimes say they walk just along the county's park roads, and never venture onto the trails. She hopes the panoramic images will compel them to hike "in a place they've never hiked before."

The other Indiana parks departments that will be using the Trekker are Porter, Valparaiso, Logansport, Fort Wayne, Huntington, Huntingburg, Bloomington, Carmel, Clarksville, Danville, Noblesville, Plainfield and Wabash, along with Johnson and Vigo counties.