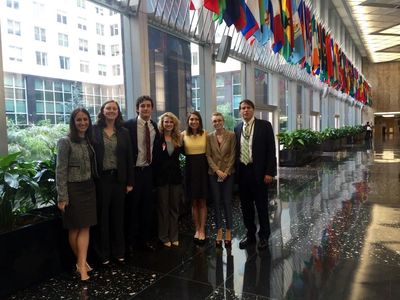 GLOBES graduate students traveled to Washington, D.C. in early May to make science policy presentations to U.S. State Department and other federal agency officials. The trip to the nation’s capital was part of the U.S. State Department Diplomacy Lab project course taught by University of Notre Dame Professor Emeritus David Lodge, an expert on invasive species and water quality issues. The course was organized around group projects that studied transferable policy lessons between the North American Great Lakes and the African Great Lakes as well as risk management studies related to the rapidly changing Arctic region. The trip to D.C. was funded in part by a mini-grant award from the John J. Reilly Center for Science, Technology, and Values.

Diplomacy Lab is a State Department initiative that harnesses the efforts of university students and faculty who study research and innovation topics related to foreign policy. Prof. Lodge received approval for a course proposal following his year in Washington, D.C. on a Jefferson Science Fellowship with the U.S. State Department. State Department advisors interact with students and provide valuable feedback via web conferences throughout the duration of the course.

After nearly six months of work and weeks of prepping final presentations, students had an hour and a half to summarize project results to a room filled with policymakers working on Capitol Hill. The audience included various members of the State Department offices of arctic affairs and ocean policy, environmental and fisheries officials with the World Bank and National Invasive Species Council, and policy advisors from the National Oceanic and Atmospheric Administration (NOAA).

Students working on the Great Lakes to Great Lakes (GL2GL) initiative projects took environmental policy solutions developed in the North American Great Lakes and applied them to the African Great Lakes. One of the main goals of GL2GL is preserving the biodiversity of the Great Lakes region of Eastern Africa. Within this study focus, students worked on specific topics including an evaluation of sustainable aquaculture and development of a risk assessment tool to prevent the introduction of invasive plants.

The Team Arctic project investigated risks associated with the spread of non-native, invasive species through the global shipping network. Declining Arctic sea ice has also increased the potential for tourism and cruise line traffic providing yet another pathway for species introductions. The presentations  highlighted the importance of passenger education by cruise lines and the monitoring role that native communities can play in the detection and prevention of invasive species.

While the focus of the trip were the group presentations, students also toured the U.S. Capitol as guests of the office of Indiana Senator Joe Donnelly, visited the National Academy of Sciences, and attended a lecture by Dr. Jennifer Doudna on “CRISPR Biology and the New Era of Genome Engineering,” at the Carnegie Institution for Science. They also met with several American Association for the Advancement of Science (AAAS) fellows including the Reilly Center’s own Melinda Gormley, who shared personal experiences in transitioning from academic careers to policy positions.

“After observing first-hand how science and policy interact in D.C., I plan to apply for a National Oceanographic and Atmospheric Administration (NOAA) Knauss Fellowship  that matches graduate students with ‘hosts’ in the legislative and executive branches of government,” said Katie O’Reilly, a third year PhD student in Biological Sciences (Lamberti Lab).

The student experiences are also captured in a State Department blog written by Sal Curasi, a second -year PhD student in Biological Sciences (Rocha Lab). The post entitled “Indiana, ‘The Crossroads of America,’ Paves the Way toward a Better Understanding of Arctic Ecosystems and Cultures,” is Week 20 in a series entitled “Our Arctic Nation” that details states’ connections to the Arctic region and aims to increase Arctic issue awareness among people in the Continental United States.

Originally published by Ginna Anderson at reilly.nd.edu on June 07, 2016.

Originally published by Ginna Anderson at research.nd.edu on June 08, 2016.