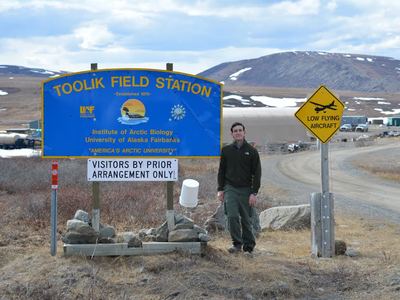 The prestigious Fulbright Program is the U.S. government’s flagship international educational exchange program, offering students grants to conduct research, study, and teach abroad. The award will allow Sal to conduct field work in Cherskii in Northeastern Russia during the summer of 2017 followed by a year-long stint in Yakutsk (also in Northeastern Russia) where he will conduct longer term studies. The highly competitive NSF GRFP program provides three years of dissertation support for outstanding graduate students in science, technology, engineering and mathematics fields. During the 2017 award cycle, the NSF received more than 13,000 applications and made 2,000 awards.

The Rocha Lab quantifies the CO2 flowing in and out of ecosystems using vegetation surveys, chemical analyses, and automated monitoring equipment. In a 2016 post for the U. S. State Department’s “Our Arctic Nation” blog, Sal wrote that arctic soils currently contain around twice as much carbon as the entire atmosphere. The balance between carbon released by the degradation of these soils and carbon sequestration in Arctic plants under conditions of climate change will help determine the future carbon balance of Arctic ecosystems. In a world made warmer by climate change, the Arctic may play a critical role in determining atmospheric CO2 inputs and temperature trends.

Originally published by Ginna Anderson at reilly.nd.edu on April 11, 2017.