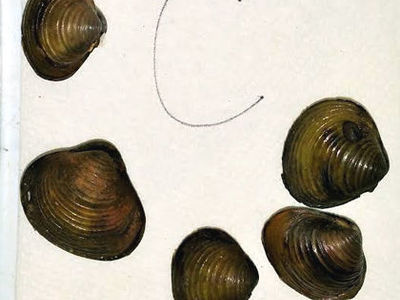 Microscopic beads and fabrics float in our waterways, get ingested by fish and other creatures, and impact the environment in lots of negative ways. But despite that knowledge, there is little we know about how these microplastics first enter aquatic food webs.

In a pilot study, researchers at the University of Notre Dame are studying the dynamics of just how microscopic plastics are first transferred from filter feeders to fish. Their investigation is using asian clams and sculpins to pinpoint the interactions underway.

The researchers originally wanted to use round gobies, a prolific invasive fish in Lake Erie. But they opted for sculpin instead because of limitations on using gobies enforced by the Linked Experimental Ecosystem Facility at Notre Dame, where much of their study is taking place. Sculpin are like round gobies in that they are bottom-dwelling and lack a swim bladder.

“The sculpin are found more in Great Lakes tributaries. They’re sort of a classic fish in those systems,” said Katherine O’Reilly, doctoral student in the Stream and Wetland Ecology Lab at the university. “The USGS (U.S. Geological Survey) did a survey that found these rivers have a ton of microplastics in them and may be a source to the Great Lakes. They’re not exactly the same, but we thought sculpin were a good proxy.” 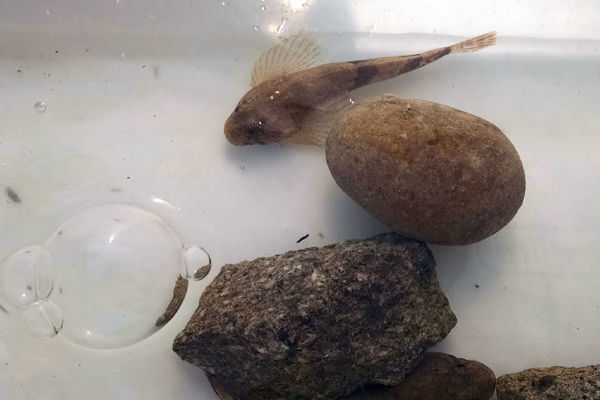 In the effort, she and collaborator Whitney Conard, a doctoral student in the same lab, are injecting fluids filled with microscopic bits of fluorescent plastic into the tissues of the asian clams, which serve as proxies for zebra and quagga mussels. From there, they are feeding the mussels to sculpin and later image how the microplastics pass through. Matthew Leevy, research assistant professor of biological sciences at Notre Dame, helps with that.

Feeding takes place in a large water bath, with each sculpin in its own tiny mesh enclosure. These are typically held underwater by rocks that scientists source from their surroundings. During this step of the effort, conditions in the water bath are monitored using a YSI handheld water quality meter. The thinking is that it’s best to keep conditions level for all the sculpin as they chow down.

“That’s really just to monitor our mesocosm setup. It makes sure conditions are good for sculpin, to make sure they’re healthy and ready to eat,” said O’Reilly. “… We want to minimize variables in water and light. We could even do different treatments or clams with different microplastic levels.”

It wasn’t always so straightforward, says O’Reilly, noting that the advantage of such pilot studies is that they allow scientists to figure out what’s the best approach.

“We first tried to feed the clams microplastics in an algae mixture. … But the clams were really sensitive and some of them actually died off,” said O’Reilly. “… The beauty of a pilot project is that we can figure out what works and what doesn’t.” 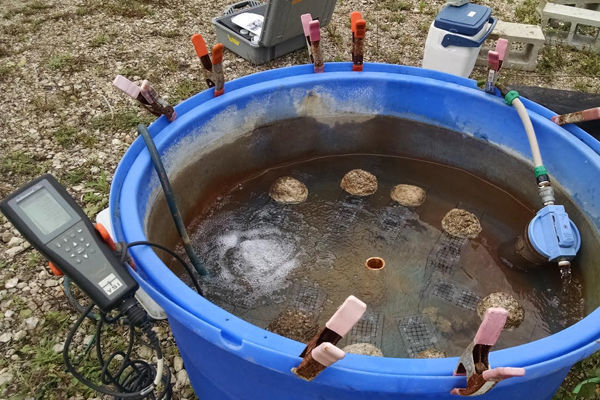 At this point, investigators are just trying the experiment with sculpin. In the future, they may scale up efforts to see how other fish higher in the food chain may be affected.

“The main idea is to see how these microplastics move from a filter feeder to that first level,” said O’Reilly. “Maybe a future study would be to look at how predators like smallmouth bass are affected, and trace it along the food web.”

She and others expect that the results of the work may show that the microplastics pass through sculpin fairly quickly. Unlike microfibers, O’Reilly says, the fluids can probably move out more easily and not get stuck. Hopes are to wrap up fieldwork before winter sets in and have results by early 2017.

But it will be interesting to learn more about the time it takes for the microscopic bits to pass. Scientists are looking to nail down just how long they persist.

“Basically, does it impact the fish before excretion? I think if we were looking at microfibers, it would get more tangled up,” said O’Reilly, noting that each mussel used in the investigation does already have a baseline of microplastics in its tissues before getting injections. “It will be interesting to see what we get here.”

As for microfibers, other investigations looking at their movement through fish have shown entanglement is commonly an issue in the small intestine. One recent summer survey on the St. Joseph River completed by an undergraduate student, with O’Reilly’s help, also shows that they could be much more common than has been thought.

The summer effort showed that microfibers from clothing and other things are everywhere, even in the effluent of surrounding wastewater treatment plants. Those usually aren’t equipped with the technology needed to remove microfibers.

“It’s amazing what you can find in a water sample. We even found microscopic styrofoam particles. But microfibers were more constant,” said O’Reilly. “Everyone thinks of microplastics, but really it seems like the most common is microfiber.”

Originally published by Daniel Kelly at www.fondriest.com on October 26, 2016