Two-stage ditch design and cover crops absorb a lot of excess nutrients before they can enter waterways. 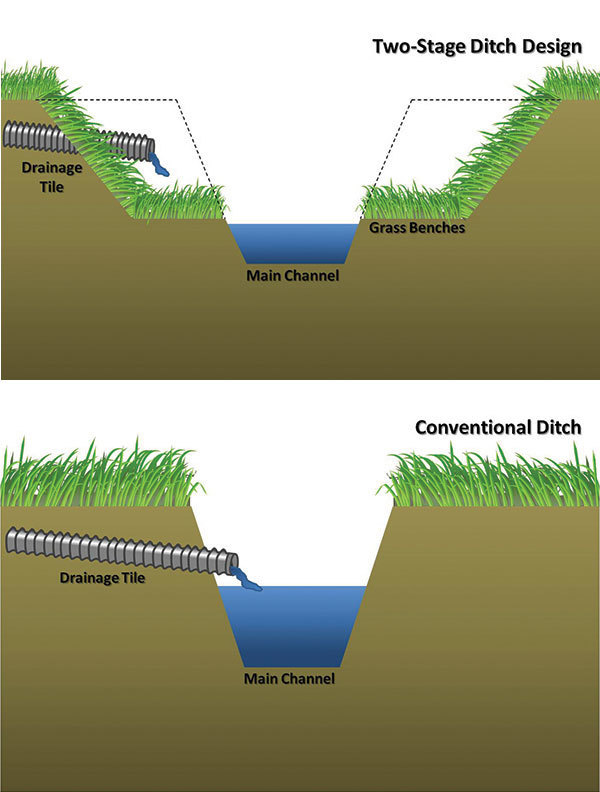 A decade ago, Mike Long looked out over his 3,000-acre farm in the northern reaches of Indiana and didn’t like what he saw.

The Shatto ditch, a canal-like drainage ditch that carries water away from the area’s farms, sometimes ran turbid, depositing thick, brown water into the Tippecanoe River.

That turbidity, Long knew, came from eroding soils that were loaded with commercial fertilizers. He and his neighbors applied nitrogen and phosphorus to bare fields, hoping to enhance ground that was losing its mineral content. Rains washed the nutrients and the sediments into the ditch because there were no cover crops or grass waterways to soak it up.

The Tippecanoe then deposited the slug of phosphorus– and nitrate-rich effluent into the Wabash River, which has already lost many of its freshwater mussel species to increasing farm pollution. From the Wabash, the pollution mixed with runoff from the rest of Indiana’s flat fields and traveled to the Ohio River. It then went to the Mississippi river system, and finally to the Gulf of Mexico, where it contributed to summer dead zones because of oxygen-depleted waters.

The pollution bothered him, Long said, but so did the fact that he had little control over the water. A deluge of rain caused flooding, which could ruin his crops. His soils were mineral-deficient. Weeds grew quickly, and he frequently needed to spray atrazine, a toxic weedkiller, to clear the underbrush.

“If we keep farming the old way, I doubt our grandchildren’s children will be doing it,” Long said. “We may be forced to do things through regulation, but I want to be in a position where, when it comes, we are already doing them.”

Today, Mike Long Family Farms is a changed landscape. His entire farm is no-till, meaning he doesn’t turn over the soil and can keep the banks stable. He plants cover crops on his fields to hold fertilizer during the winter so it does not enter the waterways. He rarely sprays for pests and weeds. He switched from conventional fertilizer to chicken manure, though he says he needs less of any kind of soil amendments now.

But perhaps the biggest change is to the Shatto itself, which went from a conventional agricultural drainage ditch to something called a two-stage ditch.

A regular ditch is trapezoidal in cross section. Water comes over the side and falls to the bottom, where it flows along to the stream. A two-stage ditch is more like a split-level staircase in cross section. The water flows down the sides gradually and collects in a bench on each side of the deeper trench. The bench is filled with vegetation that slows the flow of water and allows nutrients in the runoff to enrich plant life instead of polluting rivers.

The two-stage ditch creates a natural floodplain and returns channelized streams to their historic contours. In the process, the ditch’s benches trap sediment, blunt storm surges and collect much of the nitrate, suspended solids and phosphorus before they get into waterways.

“It’s more of a wetland approach, a self-cleaning, self-adjusting system,” said Kent Wamsley, Upper Wabash Project Director for the Nature Conservancy. “They even had a 200-year storm here and had no scouring. It stabilized the bank.”

Ditches allow farmers to work the land, helping to drain fields and stabilize banks. But they are also major conduits of phosphorus and nitrogen into tributaries. That’s especially true on Maryland’s Eastern Shore, which has become one of the most poultry-intensive regions in the country. Many farmers there apply chicken manure directly to fields already saturated with phosphorus. The nutrients that the crops can’t use either run off the land or seep through subsurface pathways into groundwater. Either way, the nutrients end up in the waterways, where they promote algae blooms that block light and harm living resources.

Maryland has 101 tax ditch associations that run drainage ditches similar to the Shatto ditch. Essentially, the farmers who use the ditch pay taxes to the association, and that money goes to maintain the ditch, kill the weeds in it and make sure workers remove obstructions. Recently, the U.S. Department of Agriculture has become more interested in funding practices that address ditch management that slows down the flow of water, reduces erosion, and keeps pollution out of streams.

In Indiana, the two-stage Shatto ditch is a joint partnership between the Nature Conservancy, the Kosciusko County Soil and Water Conservation District, the University of Notre Dame and the Shatto farmers. In addition to Long, 11 other farmers are participating in the two-stage ditch project. Together, their lands represent 67 percent of the Shatto watershed. They’re converting to no-till farming, and their cover crop acreage has jumped from 300 acres just a few years ago to more than 1,600 acres today.

Since the first two-stage ditch was built in Ohio 13 years ago, the practice has gained traction in the Midwest. In Indiana there are 52 projects in 21 counties, for a total of 23 miles of ditch.

Jennifer Tank, director of the Notre Dame Environmental Change Initiative, has been monitoring the Shatto ditch since 2007. Her research has found a 31 percent reduction in nitrate in the ditch’s water compared with a conventional ditch and a 50 percent decline in phosphorus. Those numbers meet Indiana’s goals for nutrient reduction. In addition, 12 percent less water ran off the landscape. That is important in a river like the Wabash, which is responsible for 11 percent of the nitrogen loads to the Mississippi River system.

“In essence, the two-stage becomes a wastewater treatment plant for the farm,” Tank said. “If we do it over hundreds and hundreds of miles of headwater streams, we see some indication of how effective it can be.”

The two-stage ditch is not a cheap practice. At between $6–10 per linear foot, a farmer will pay $13,000 for a half-mile ditch. The two-stage works best in concert with the cover crops and no-till farming, so the land will become an even bigger sponge.

But the USDA has been more willing to foot the two-stage bill after the recent algae blooms in Lake Erie. Last year’s blooms cut off the normal water supply for half a million Toledo residents for several days. That bloom was traced to excess phosphorus from the Maumee River watershed, in which agriculture is the prime land use. Even the farmers agreed that they were contributing to the problem: In a 2012 Ohio State University survey of the Maumee watershed, 75 percent of respondents agreed that fertilizer fueled negative impacts to the waterways, according to Justin Chaffin, senior researcher and limnologist at Ohio State’s Stone Lab on Lake Erie.

Chaffin’s lab is working with Ohio Sea Grant to connect more farmers with the funding they need for practices like cover crops, no-till and the two-stage ditch. They’re so important, he said, because the lake responds quickly to changes. Blue-green algae blooms were common in the 1950s and 1960s, but the Clean Water Act brought major improvements. Upgrades to sewage treatment plants and a ban on phosphates in detergent made long-lasting and major improvements.

“If we find a way to keep phosphorus out of Lake Erie, we will see improvements in just one year,” Chaffin said. “We have been relying on the weather to control our blooms. That’s why projects like this are a huge help.”

Cost isn’t the only limitation to the two-stage ditch. There is also space. In the Chesapeake Bay, 200 feet of land is hard to come by, said John Rhoderick, special projects and research coordinator with the Resource Conservation Office at the Maryland Department of Agriculture.

“We’re very interested in re-establishing some of these floodplains for some of these drainage ditches,” Rhoderick said, “but any time you get into that issue, it almost becomes a taking of private land.”

Rhoderick said the department began to offer cost shares on modified two-stage ditches about three years ago, thanks to federal conservation funds, and it is working with one farmer in the Pocomoke and another in the Nanticoke watershed on the projects. Monitoring money is scarce, and the department isn’t doing constant testing on the projects. But Rhoderick said that the water quality benefits have largely been proven, both at ditches in Ohio and through Tank’s work in the Shatto.

Maryland recently received $5 million in federal funds from the USDA for conservation practices. Rhoderick said he expects the money to be used for two-stage ditches as well as water-control structures and gypsum curtains to reduce phosphorus — a practice still being tested at the University of Maryland Eastern Shore.

Already, Maryland farmers are testing other new ditch conservation practices that try to mimic natural processes. One, called a bioreactor, uses wood chips to “digest” nitrogen so that less of it will reach the stream. Water control structures allow farmers to conserve water during droughts and use it when they need it. Maryland farmers already subscribe to cover crop programs; many committed to no-till practices on their farms long ago.

None of the reductions would work without the farmers, though. Mike Long and his neighbor, farmer Jamie Scott, had to be willing to commit to about six years of waiting and seeing. That’s how long it takes for the benefits of no-till farming, cover crops and the two-stage ditch to become apparent. 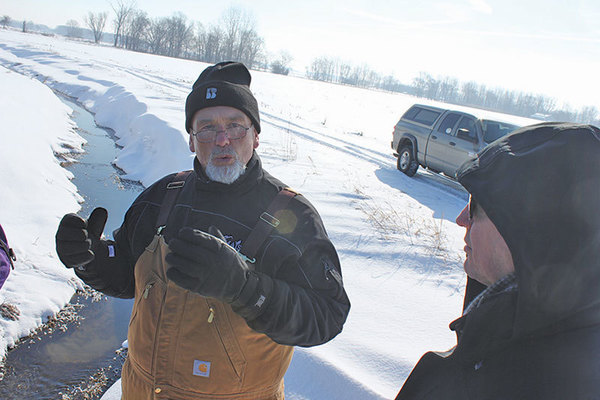 Scott, for his part, is all in now. His 2,000-acre farm is 100 percent no-till land and cover crop. And, he sees huge benefits. He doesn’t have to hire someone to till his land, or do it himself. Like Long, he rarely sprays for weeds; the cover crops, he said, “messes up their life cycle.” A newly mineralized soil has brought out thousands of earthworms after rains, which enriches the soil and brings the land back to its natural state.

“No one who has been in the (no-till) system for five years really leaves it,” Scott said.

The two farmers are the example that helps Tank sell the two-stage ditch across Indiana.

“It takes dedication to change an infrastructure that’s been doing business in a certain way for so many years,” Tank said. “What really made it so exciting for us is the partnership. Jamie Scott and Mike Long represent the very best that work here in Indiana.”

Long says he is still “disgusted” when he sees rivers running turbid, though he’s seeing them less often. He knows farmers can do more than they are, and that regulations are likely to come along to force their hand. But from the banks of Shatto ditch, with the sun gleaming off the snow, the future looks bright.

“I feel good about what I’m doing,” Long said, “because I know now that I’m going to be here for generations.”

This story was made possible through the Institute for Journalism and Natural Resources.