A pair of bald eagles have hatched a baby eaglet at a highly visited park in St. Joseph County for the second time this spring — this time at St. Patrick’s County Park. 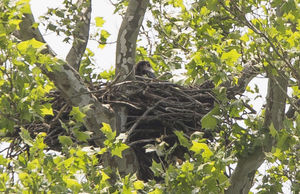 It’s a joyous announcement for park officials. But frustrating, too.

Since winter, county parks Director Evie Kirkwood has been burning to share news that an eagle nest was even there. But, as she finally went public Wednesday, she asked visitors to avoid stomping into restricted areas to find or get close to the nest.

A sign along the east side of Laurel Road warns of the area to avoid, and the park has let the grass grow tall on paths that are normally mowed, all to protect the national bird.

Her concern and that of the U.S. Fish & Wildlife Service: Too much human activity could disrupt the eagle family in the sensitive time until the eaglet begins to fly. That could be as early as late July, depending on exactly when the eaglet hatched, which is hard to tell, Kirkwood said.

The blunt truth is that your chances of seeing the nest grow worse the closer that you approach it, thanks to leaves on the towering trees.

Kirkwood first noticed two eagles building their nest last October or November. They’d taken over and added sticks to a red-tail hawk’s nest, marking the first time anyone has witnessed eagles nesting in the county parks, she said.

Kirkwood avoided talking about it publicly — even after The Tribune and other keen observers saw the nest this winter — following Fish & Wildlife’s urging to keep human activity about 300 feet away from an eagle’s nest while the birds are mating or raising an eaglet.

Then, while she was scoping the nest out through binoculars on May 22, she noticed one eaglet’s fuzzy head emerge. Now that the eaglet is much larger, she can confirm there’s just one.

On May 8, the Tribune reported that three eaglets had hatched at Potato Creek State Park in North Liberty, marking the first time eaglets had been observed in that park’s 38-year history. Naturalist Tim Cordell believes the birds may have hatched in late April and could begin flying by the end of June. That nest remains so obscured by vegetation that you couldn’t find it, he said, adding, “Ever since we went public, we’ve left them alone.”

This marks a trend that could continue in the near future, he said: “The eagles are getting way more common.”

Raptors are doing well in the county. The state-endangered osprey have four nests at Potato Creek, one at St. Patrick’s and another one near Saint Mary’s College, most of which show potential for hatching baby osprey. And the peregrine falcons in downtown South Bend are raising four chicks.

Still, the raptors beg caution when they nest in such public spots.

Visitors should avoid walking near or under St. Patrick’s osprey nest, where Kirkwood suspects a mother may be incubating an egg. That nest is atop a pole and platform, along a looping trail by the river near the park’s southern end.

The eagle nest at St. Patrick’s is in the midst of a controlled ecosystem that the University of Notre Dame created two years ago, called ND-LEEF, or Linked Experimental Ecosystem Facility, on the east side of Laurel Road. That may be pure coincidence, said the project’s assistant director, Brett Peters. After all, the eagles used a hawks’ nest that was already there.

“We knew we were creating ideal bird habitat,” he said, also noting a pond that ND-LEEF built that attracts mostly Canada geese. “We didn’t think they’d move in so quickly and be such a charismatic species.”

ND-LEEF has delayed its research for at least a month to give the eagles a breather, though that won’t delete or curtail any of this year’s work, Peters said. Ecologists — just a few at a time, working quietly — will return to the site June 15 to turn on pumps that cause the streams to flow and will begin experiments, he said.

“I think we can co-exist pretty well with the eagle,” Peters said.

As in the past, he said, the ND-LEEF site remains off-limits to the public unless ecologists are there. Kirkwood said it’s fine if a few people quietly approach the ecologists, but not if it’s a large or noise group. It won’t permit large groups until late summer. ND-LEEF’s open house, called Science Sunday, typically comes in the fall.

Also, barking dogs should be kept away, Kirkwood said.

In the time from courtship until eaglets hatch, the parents could decide to abandon their nest if they feel disturbed by humans, according to U.S. Fish & Wildlife’s guidelines on bald eagle management.

Kirkwood wants people to enjoy seeing eagles. But, if visitors push those boundaries, Kirkwood said, “We are going to have to take steps that are even more severe.”

Originally published by Joseph Dits at www.southbendtribune.com on June 4, 2015.