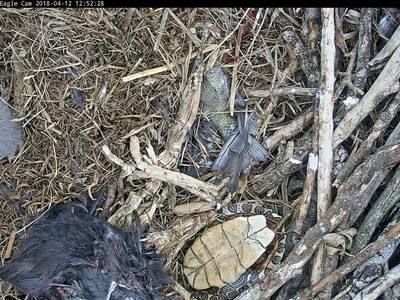 Gary Lamberti admits that he needed a certain daily fix each spring...and you might have, too.

Lamberti, a professor in the Department of Biological Sciences, sneaks a peek at Notre Dame’s bald eagle live stream daily during the nesting period. Like other viewers, he’s fascinated by what the eagle parents bring back to the nest for their brood. Fish, a duck, the occasional rabbit . . . and was that a turtle?

His interest in watching the eagles’ activity through the high-resolution digital camera prompted him to design a study that would evaluate the diets of nesting bald eagles in northern Indiana. The camera is perched above the eagles’ nest at the Notre Dame Linked Experimental Ecosystem Facility (ND-LEEF), which is part of the University’s Environmental Change Initiative (ND-ECI). Doctoral student Katherine O’Reilly and undergraduate Firas Houssein ‘20, who is now in medical school, led the analysis that counted and identified all species of prey brought back to the nest during the 2018 season.

The camera records video continuously – streamed to anyone who would like to watch – and shoots still photos every 20 minutes during the brood-rearing period from March to June.

During the 2018 season, the researchers found that the eagles brought back 135 prey items to the nest. Fish – 13 different species – comprised 73 percent of the total, but 13 percent of the time the eagles brought back birds (the American coot, which some people mistake for a duck, was the most commonly seen bird species), and shared a diet of mammals occasionally as well (10 percent). Surprisingly, even turtles were deposited in the nest 4 percent of the time, according to the recent article in the Notre Dame-based journal, the American Midland Naturalist.

“The resolution on the camera is so great that we were able to identify species easily - we could see the scales on the fish,” O’Reilly said. Not only did the camera provide an easy, unbiased way to monitor the birds’ diet, but it also engaged audiences who watched the video feed. During the 2018 brood-rearing period, the eagle camera live stream was viewed over 92,000 times and gave audiences a front-row seat into the lives of the “Notre Dame” eagles.

The project was an example of what type of work can be done using images - called remote sensing research - and was important during the Covid-19 pandemic when laboratory and most field research was curtailed, said Lamberti, who is affiliated with ND-ECI.

Although the study collected data from a single bald eagle nest during a single year, O’Reilly said the information is helpful for future management of the species. The bald eagle was removed from the federal endangered species list in 2007 and has rebounded in states like Indiana where it was virtually eliminated decades ago.

“By studying top predators like eagles, we can understand the health of the ecosystem,” O’Reilly said. “They do a much better job of sampling the environment than we could ever do.”

The nest camera will be replaced with an upgraded model during the fall, Peters said, with a microphone added to include sound to the live feed.

“This project is ideal for engaging undergraduate students in research that is really meaningful to members of the public who are entranced by the Eagle Cam,” he said. “But in fact, the results added substantially to our knowledge of eagle food preferences, because no one had ever conducted such an in-depth analysis of literally every 20 minutes in the lives of an eagle family.”

Originally published by Deanna Csomo Ferrell at science.nd.edu on August 16, 2021.