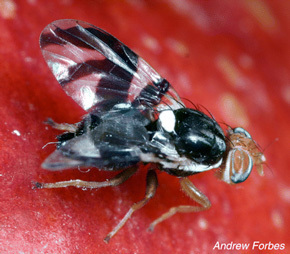 Some insects only have one annual crack at the whip. Emerging from a state of suspended animation during winter – known as diapause – many insects have a single season to successfully complete development and reproduce. And when your life-cycle is tightly synchronised with other seasonal events, such as fruit production, accurate timing is essential. Yet little was known about how pupae reactivate development when they terminate diapause ready for a new season.

According to Gregory Ragland from the University of Florida, USA, larvae of the apple maggot fly (Rhagoletis pomonella) are a major apple pest in the US. However, R. pomonella larvae infested indigenous hawthorn fruits – which fruit later than apples – long before settlers brought apples to North America, so the flies that switched host had to evolve rapidly to adjust when they emerge from diapause to catch early fruiting apples. Knowing that R. pomonella is studied by scientists intrigued by rapid species evolution, Ragland, Jeffery Feder, Stewart Berlocher and Daniel Hahn decided out find out how the R. pomonella population that persists in attacking hawthorn fruits initiate emergence from diapause (p. 3948).

Collecting maggot infested hawthorn fruits from a field in Michigan, Ragland and Hahn transported them to Florida and collected the larvae surfacing from the fruit. Next, the duo simulated the onset of winter by cooling the larvae to 4°C as they transformed into pupae and entered diapause. Then, after 20 weeks in the cold, the team warmed the pupae to 24°C and monitored their metabolic rate to track when it rose and they began to emerge from diapause. Collecting pupae before their metabolic rate began rising, when their metabolic rate had risen by 40% from the diapause level over 24 h, and 48 h after their metabolic rate began to rise, the team analysed how the insect's gene expression patterns changed using a custom-built gene chip containing between 7000 and 8000 unique R. pomonella genes. The team compared how the expression of groups of genes changed over the first 48 h after the larvae's metabolism began rising to find out how they terminate diapause and reinitiate development and growth.

‘The punch line of the analysis is that almost all the patterns had this large change in gene expression that happened right when we had the metabolic rate increase,’ says Ragland. And when Ragland and Scott Egan took a closer look at the genes that were strongly activated, they found several genes involved in cell cycle control, which regulates when cells divide. ‘The cell cycle is arrested during diapause and we see marked changes in activity in some of the important cyclins and cyclin-dependent kinases [that regulate the cell cycle] concordant with the up-tick in metabolism. That suggests to us that they are getting ready for, or they are going through, mitosis [cell division] at that point and it is roughly concordant with the increase in metabolic rate, so we feel we have pinpointed pretty well when development starts up and diapause termination is complete,’ says Ragland.

The team also found changes in heat shock protein expression, metabolic gene expression, genes involved in development, and genes that are known to participate in diapause termination in other organisms. They are now keen to find genes that have different regulation patterns in the late emerging hawthorn maggots and early emerging apple maggots to identify other key components of the diapause termination process.