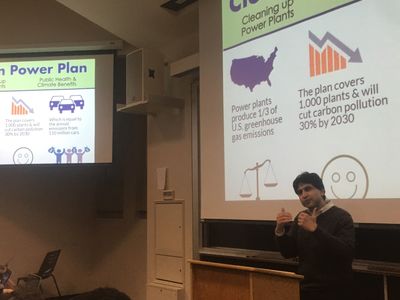 As Jesse Kharbanda stood at the podium to finish his talk on Thursday night in DeBartolo Hall, an image of another man at a podium appeared behind him. Much like Kharbanda, it was a leader who called Americans to pursue what then seemed a preposterous dream.

“This is President Kennedy giving his moonshot challenge speech (in 1962),” said Kharbanda, executive director of the Hoosier Environmental Council (HEC).  “I think remembering how we reached the moon is still a good metaphor for addressing big problems such as climate change.”

For 11 years Kharbanda and the HEC have worked for environmental change in Indiana, a state where such ideas can be a hard sell. Yet in a talk titled “Is Environmental Policy Progress Possible in the Age of Trump?” he explained that bi-partisan progress is an achievable dream. His lecture was sponsored by the Sustainability Minor, the Environmental Change Initiative, ND-Energy, the Center for Social Concerns, the Hesburgh Program in Public Service and Indivisible Indiana District 2.

“My talk isn’t so much about President Trump, but the worldview he embraces, which animates a significant portion of the population,” Kharbanda said. “But in places like Benton County (Indiana), even as a second-generation immigrant from St. Louis, I’ve found common values and ideals among fifth generation rural Hoosiers. I’ve found that we can make intelligent arguments for environmental change in Indiana.”

During a presentation that highlighted a five-point plan for progress, Kharabanda often referenced what he called “a basis for hope.” For him and the HEC, that’s code for how slow and steady wins the race – or at least forestalls efforts to weaken or abolish environmental regulations. Among his examples, he cited Indiana Senate Bill 207. The 2018 bill sought to prevent homeowner associations from prohibiting the installation of solar panels.

“Homeowner associations wrote these rules at a time when solar panels were ugly,” said Kharbanda. “Now, they’re more streamlined – they fit neatly on roofs and don’t jut out at odd angles. Instead of banning them, we support standards for how they can be installed so that they won’t intrude above rooflines or fences on the ground.”

While the bill passed the Indiana Senate with bi-partisan support, it failed to receive a hearing in the House. No matter, says Kharbanda. The ad hoc coalition that formed around enacting SB 207 will try again, and believe it can pass.

“We found that there’s a real ‘Don’t tread on me mindset’ around this,” he said. “People want to know why their homeowner’s association should prevent them from doing something positive on their property that’s producing clean energy.”

Still, Kharbanda didn’t downplay Indiana’s considerable environmental problems. Among them, he cited the 2,000 manure dumps that hold millions of gallons of raw sewage from Contained Animal Feeding Operations (CAFOs) that house ducks, hogs and turkeys. He said there are no emission limits on the hydrosulfides, particulate matter and volatile organic compounds that they produce.

“The CAFO manure dumps pose a direct threat to lakes and rivers, along with the one million Hoosiers who use well water in their homes,” he said.

To find common cause, Kharbanda said, advocates should “stitch together coalitions from a cross-section of Hoosiers.” For increased CAFO oversight, this could include animal rights supporters, people who want clean air and water to preserve their property values, as well as Tea Party groups that advocate for local governmental control of natural resources.

The place where Kharbanda foresees the greatest cooperation – and progress -- is water infrastructure. Especially as cities spend billions to upgrade sewage systems and prevent the overflows that contaminate rivers after heavy storms.

“Our infrastructure is crumbling in many places, and this is the next frontier for making Indiana an economically advanced state with a good quality of life,” he said. “Governor Pence was for this and so are many Republicans and Democrats.”

During his talk, Kharbanda also urged students to volunteer and pursue careers that promote environmental well-being. His own academic pedigree includes degrees from Oxford University and the University of Chicago. Debra Javeline, the Department of Political Science associate professor who introduced Kharbanda, said he’s an example worth emulating.

“Somebody with his credentials could do anything with his life,” Javeline said. “But he’s chosen to do something with the environment – and you can do the same.”