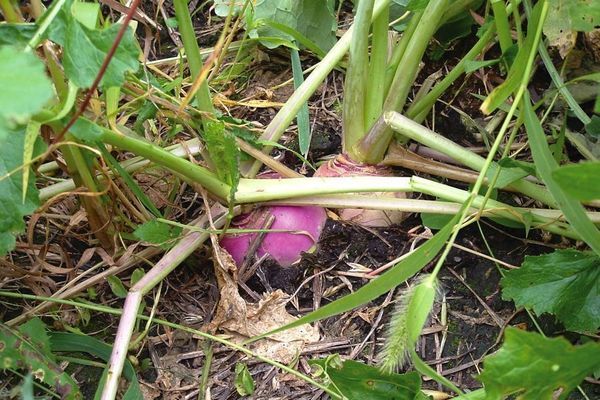 Turnips used as a cover crop.

Jamie Scott was part of a panel at the 2014 Commodity Classic this past February. Scott uses cover crops on his Indiana farm and coordinates the seeding of cover crops on another 100,000 acres.

Scott presented yield data from nine side-by-side trials conducted in 2012. The farmers involved had been growing cover crops for more than a year and had a good handle on the management, he said. Other than half the corn field being under a cover crop, everything else in the side-by-sides was the same, Scott said.

“We gained 19.8 bushel per acre average over those trials,” said Scott. Based on that year’s corn prices, the yield increase added up to about $100 per acre.

Scott isn’t the only one who’s seen yield jump with cover crops. Rob Myers, University of Missouri agronomist and regional director of extension with the U.S. Department of Agriculture, worked with about 750 farmers in the 2012 crop year. Myers and his colleagues did side-by-side comparisons of fields with cover crops and bare fields.

Myers cautioned that some farmers lost yield or maintained status quo with cover crops. “It kind of depended how long they’d been doing it, the approach they took to cover crops.”

Although yield alone often seems to pay for cover crops, Myers said “grazing is the single best way to make them pay for themselves right away. It’s a really good economic return from the studies I’ve seen.”

Winter cereals, such as cereal rye, are the most popular cover crops in the U.S., Myers said. Legumes are also a popular choice. Brassicas such as radish and turnips are becoming more popular, Myers added.

“And the longer farmers used cover crops, the more they tend to move towards mixes of cover crops, because of the benefits there,” Myers added.

About half of the farmers surveyed drilled cover crops to establish good stands by the fall, Myers said, but many are broadcasting to establish the crop early. About 14 per cent of surveyed farmers used a plane to seed. Three per cent used corn and soybean planters to precision seed and Myers said that number was likely to rise.

Seeding the cover crop early was Scott’s priority, either with a plane or a high-boy sprayer, he said. He added there was a benefit to establishing the cover crop “before the crop comes off, to increase organic matter scavenging, more nutrients and have some footing to work off of in harvest.”

Panelists cited agronomic benefits such as more organic matter and better water infiltration and retention. Scott said even with continuous no-till “we were struggling to get our organic matter levels up where we wanted them. When we add cover crops, we do that extremely fast.”

Mike Plumer, a conservation agriculture consultant based in Illinois, has been working with cover crops since 1980. In Plumer’s neck of the woods, mare’s tail is resistant to glyphosate, 2,4-D and all ALS herbicides.

For the last seven or eight years, Plumer’s been looking at using cover crops to control the herbicide-resistant weed. Cereal rye can “completely control the resistant mare’s tail or horse weed to the point where we get 100 per cent control without a herbicide at all,” he said.

Plumer said cover crops can also control nematodes and disease in soybeans. Research at Purdue University found annual ryegrass can drop soybean cyst nematode populations as well as weeds that host the pest, such as purple deadnettle. And a three-year study funded by the U.S. Department of Agriculture found cereal rye had the most potential to suppress sudden death syndrome and rhizoctonia root rot in soybeans.

Scott encouraged farmers to use cover crops as a safety net when applying nitrogen. “If we over-applied (nitrogen) in the year of the drought, we didn’t use it all. Instead of losing it, we kept it on our farm,” said Scott.

Scott also discussed a watershed study in his area that soil tested in the field, and measured nutrients in the main flow of the ditch and tile lines. “Time and time again, the no-till cover crop field has a higher nutrient level in the field, but it is not coming out in the tile,” he said.

“So if you can get an extra foot of rooting depth on corn or beans, think of all the extra moisture it can access through a dry year,” said Myers. Some cover crops also blanket the soil in residue, cutting evaporation, he added.

Just as with any other new practice, there will be times when farmers aren’t happy. For example, in the dry spring of 2012, Scott initially thought the cover crop was pulling moisture from the cash crop.

“I told people at one point in time the only way I thought I was going to have income was if I put up a toll booth at the end of our road and charged people to look at the disaster,” he said. “But because of the soil health, because of the rooting depth that we had, that plant got down to moisture, got down to nutrients.”

Lisa Guenther is a field editor with Grainews based at Livelong, Sask. Contact her at Lisa.Guenther@fbcpublishing.com.