This is a guest feature article by Janet Stengle, Notre Dame sophomore journalism student in the Gallivan Program.

The University of Notre Dame Fighting Irish: gold helmets crackling under a roar of the Victory March, embraced under Jesus’ outstretched arms.

Who are the Fighting Irish then? In Notre Dame’s What Would You Fight For? video series, it’s students, faculty and alumni working to improve society. 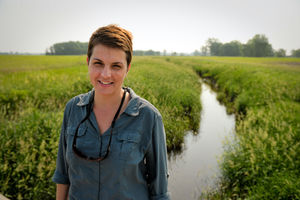 This fall, the series features Biological Sciences professor Jennifer Tank and her fight for clean water. She takes the university’s moniker from the football field into Western Lake Erie where algal blooms, caused by fertilizer run-off, threaten a vital water source.

Her research contributes to the residents of Toledo, Ohio, where winds blew algal blooms into water intake pipes in the summer of 2014. Drinking water was unavailable for three days.

On Saturday, Aug. 2, 2014, Toledoans scrambled to shelves before the last pack of water bottles was yanked away. Lake recreation plummeted, and algal blooms cemented a fear of tap water.

“It’s not just if you are passionate about the environment… My whole thing was bringing awareness to an environmental change that actually affects all of us,” Tank said.

The two minute video highlights the Tank Lab working together with farmers. “We really wanted to tell the story that we’re doing the research differently,” Tank said.

Her team tests nutrient levels on farmers’ lands to find an answer that allows farmers to promote a healthy environment without losing business.

“Instead of the hard sell, it’s a soft touch,” Tank explained. “And because they’re part of the project…they make the change themselves.”

The Tank Lab is minimizing unfeasible, lofty goals to actual possibility. “If you make it in their watershed and do it on their land and then show them the data, that shrinks the change,” she said.

This cohesive atmosphere is possible through Notre Dame and its dedication to outward benefit, Tank said.

“That’s not the way this kind of research gets done in big schools where they own big farms, where they’re doing it in controlled conditions,” Tank said.

Tank has worked in atmospheres where neither service nor collaboration affected research. She was given her lab, and most of her work was then done independently. Collaborators were outside the universities, not in them.

“When I talk about what it’s like to do science here, it’s intellectually stimulating,” Tank said. “But there’s this little thing, this intangible thing, and that’s the mission.”

“I’ve been at a lot of universities…and I don’t know what the mission was. We didn’t talk about the mission,” Tank said. “I think that’s something that’s in us from the time both as students or as faculty when we come here, that then you kind of carry it forward, and that’s exciting.”

So what is the mission?

Prof. Tank is involved in the Environmental Change Initiative, a group on campus of 40 faculty members involved in environmental research. The motto of the ECI is simple: “science serving society.”

“I hear that a lot, we talk about it, I see it on a letterhead, and I realized in doing the ad that that really rings true for me,” Tank said. “Why am I doing the research that I’m doing? I’m doing it in the real world so then the outcome of the research can actually change something.”

She concludes the video. “We are the Fighting Irish,” she says.